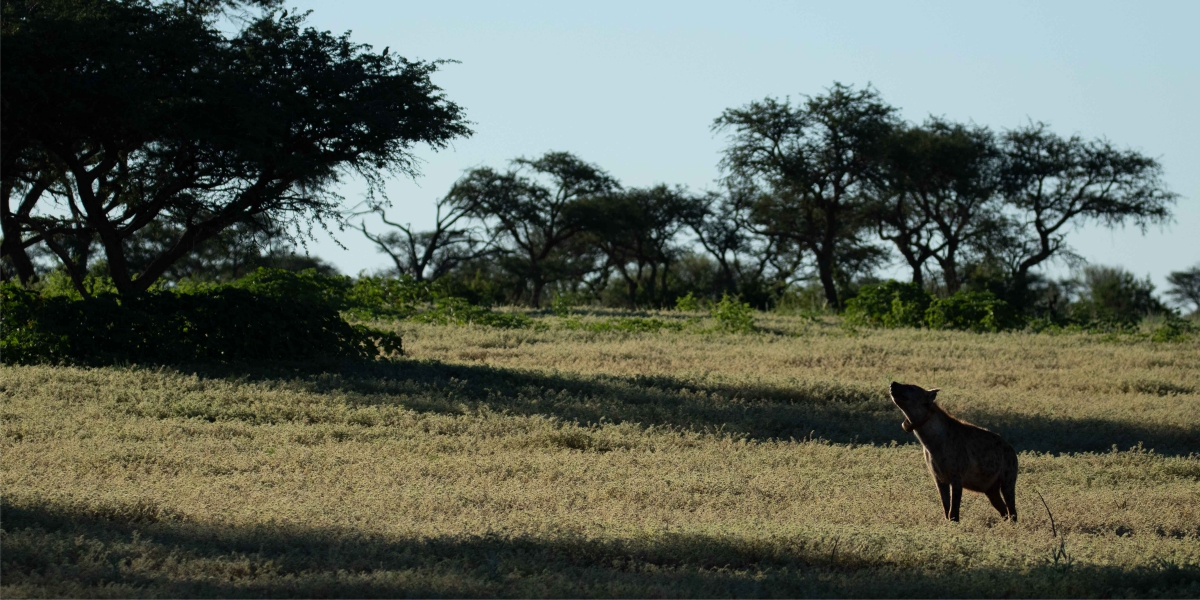 Historically, spotted hyena numbers declined in the southern Kalahari due to land and habitat loss leaving a void in the ecosystem. The spotted hyena has a valuable place in the Kalahari’s ecosystem. As a scavenger, it helps to rid kill sites of carcass remains. These may become breeding grounds for parasites and diseases if left to decay on their own. Contrary to popular belief, spotted hyenas are not only scavengers. About 50 percent of what they consumer is live prey.

As part of Tswalu’s vision to restore the Kalahari and protect its biodiversity, the conservation team has successfully reintroduced spotted hyenas. The most recent release of five spotted hyenas onto the reserve was about a year ago. In recent months it has been good to see the integration between the new spotties, as we refer to them, and some of the previous releases – a positive sign of population recovery.

This summer, fellow guide Mauritz Senekal discovered a new den site and the presence of a female. A female spotty usually retreats to a den site to give birth. A few days later, I made my way to the same site and found the female in the same place. I decided to wait patiently to see what she would do and about an hour later she suddenly got up and walked over to the den entrance. She called and out popped two tiny cubs, the newest additions to the Tswalu spotted hyena population.

Spotted hyenas have a strong social structure that is matriarchal. Females are ranked first, from highest to lowest, followed by the males. There is always a risk of males killing brand-new cubs, which is why the female goes off on her own to a den for up to two weeks. A few days after the cubs are born, she will return to the communal den site and introduce her new cubs to the rest of the clan. She typically displays dominant behaviour, especially to low-ranking males, so that they know the cubs are part of the clan and must be protected and not destroyed.

Once this has been established, the clan members all work as a team to keep each other and the cubs safe. Especially in the Kalahari, safety in numbers is crucial to survival. Even when a hyena clan is hunting, the members work together by consuming the carcass at the kill site rather than dragging it back to the communal den which may attract other predators and put the cubs in danger.

Finding new spotted hyena cubs and following their progress has been awesome, as it gives us hope that this important species is flourishing and playing its part in the Kalahari ecosystem.

All images by Barry Peiser