A diverse range of wildlife is protected in South Africa’s largest private game reserve, including many rare and critically endangered species and five of the most elusive species in Africa. There are 85 mammals and 264 bird species at Tswalu, and many reptiles, insects and butterflies, offering opportunities for extraordinary sightings and encounters while on safari. Many of the animals on the reserve are dry savanna specialists, well adapted to the harsh conditions of the savanna biome with its extreme temperatures and scarcity of water in the winter months.

Oryx, wildebeest, zebra, giraffe, warthog and ostrich are common sightings as you navigate along the dune roads in search of Kalahari black-maned lion, desert black rhino and African wild dog. Look out for the massive community nests of sociable weavers, the iconic structures of the southern Kalahari. In the foothills of the Korannaberg you may encounter leopard, the rare Hartmann’s mountain zebra, reedbuck and klipspringer. Cape buffalo and large predators, including cheetah, hyena, and black-backed jackal, provide memorable sightings.

Although plentiful, the game is scattered across a vast expanse and sightings are hard earned, which is where the expertise and experience of our guiding team comes into play. Guide and tracker work together to ensure that guests experience all the wonders of the southern Kalahari, not just obvious attractions like the big cats and other predators. The magic of Tswalu is often in the details, from dung beetles rolling balls in the red sand to the quirky antics of the meerkats. Iconic Kalahari sightings include a pronking springbok against a backdrop of red sand or the striking silhouette of an oryx, or gemsbok, atop a dune.

Spending time at a Sociable weavers nest may reward you with sightings of two iconic Kalahari birds, the Sociable weaver and the Pygmy falcon, the smallest raptor in Africa. These birds frequently occupy the nest chambers and prey on weaver chicks and eggs along with snakes such as the Cape cobra and boomslang.

Read the guides’ stories in our quarterly Wildlife Journal

Tswalu is undoubtedly one of the best places to see the rare and endangered ground pangolin, a charismatic, prehistoric-looking scaly mammal that uses its long, sticky tongue to catch ants and termites.

African wild dogs are formidable hunters, working strategically as a team to chase down prey, a common spectacle for guests. These endangered mammals are also known as Cape hunting dogs or painted dogs because of their colourful, mottled coats.

Alongside the typical big game, you can expect to encounter rare antelope that are unique to the Kalahari such as roan, sable, gemsbok, eland, springbok and red hartebeest.

Classified as ‘Vulnerable,’ having been hunted to near extinction, the Hartmann’s mountain zebra has also found refuge on the reserve. Agile climbers, they are often encountered in the foothills of the Koranneberg.

The largest remaining brown hyena population, the rarest species of hyena, is located in the southern Kalahari with individuals thriving on the reserve. Distinguished from other species by their long, shaggy, dark brown coat, pointed ears, and short tail, they are poor hunters and are primarily scavengers, active mostly at night.

There are just two or three critically endangered White-backed vulture pairs on the reserve, which are potentially nesting. Notably, Tswalu recently became South Africa’s first Vulture Safe Zone, leading the way in what will become a network of safe zones across the country that will allow vulture populations to stabilise and thrive.

Listed as ‘Vulnerable’, due to a recent rapid decline across its entire range, the mainly terrestrial Secretary bird, a large bird of prey with an eagle-like body and crane-like legs, is at home in the open savanna grasslands. 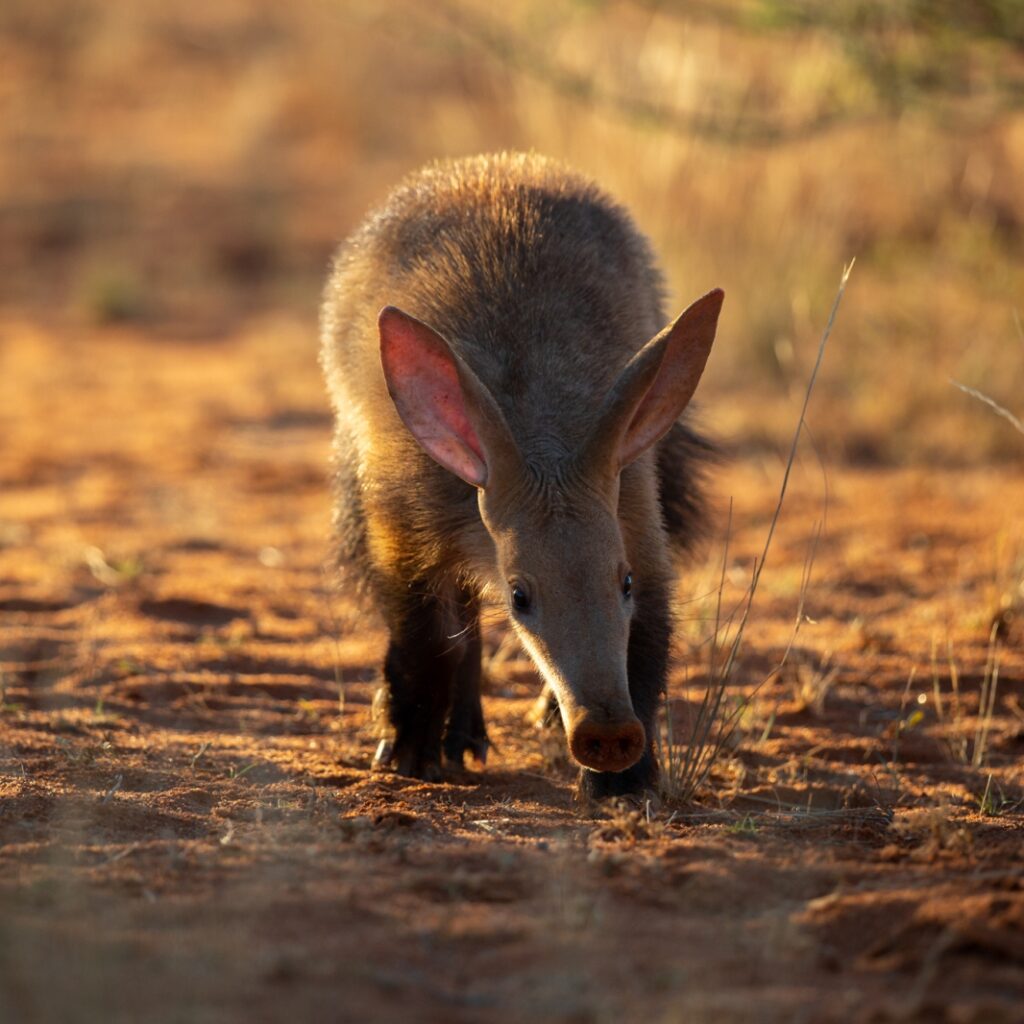 You will have front-row seats on your wildlife safari experience for sightings of five of the most elusive species in Africa: pangolin and brown hyena (which are also rare and endangered), aardvark, aardwolf and bat-eared fox.
The elusive five are all nocturnal species. In summer, the hot daytime temperatures force aardvark and pangolin to stay in their cooler burrows for longer and they only tend to come out late at night, so guests often go out on a drive after dinner. In winter, daytime sightings are more common as these animals come out to forage in the afternoon sunshine before it gets too cold.

The Kalahari black-maned lions are known for their majestic size and beautiful manes, although they are the same species as other lions found across Africa. Two distinct prides on the reserve provide endless viewing opportunities. Despite their remarkable adaptability, leopards are in steep decline elsewhere in Africa and remain elusive at Tswalu. Conversely, the reserve is unquestionably one of the best places in southern Africa to see cheetah in the wild. These elegant cats provide fascinating game viewing and interactions, from high speed pursuits and teaching their cubs to kill, to chasing jackals off their prey. 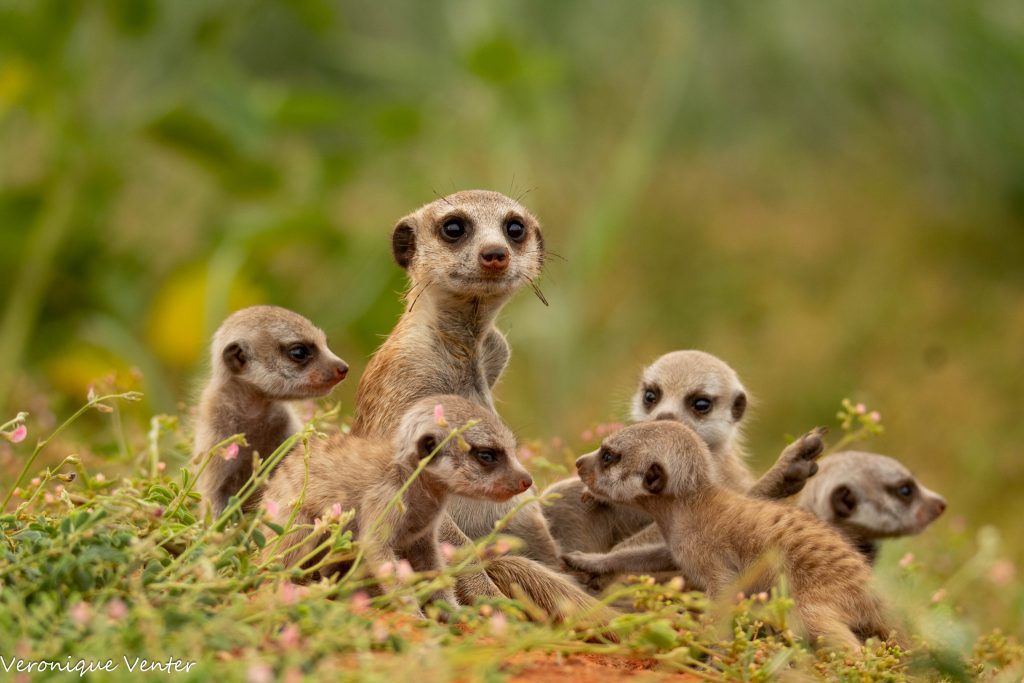 Three colonies of habituated meerkats offer endless entertainment with their gregarious natures and amusing antics. These groups accept the presence of humans without letting it disrupt the important business of grooming and foraging. Visit the meerkats at their burrows on an early morning game drive before they venture out for the day.

If birding is a key objective of your safari it is best done on foot but you are likely to spot numerous birds species even on game drives. Sightings depend on which habitat you are traversing.  There are some birds that you will see across the property, however, including Sociable weavers, White-browed sparrow-weavers, Namaqua doves, Fawn-coloured larks, and Ant-eating chats.

A memorable sighting at Tswalu is the aerial ‘rocket’ display of the male Red-crested korhaan as he launches himself vertically up to 30 metres above the ground then throws himself into a backward somersault, dropping out of the sky with wings closed, as if he has been shot. 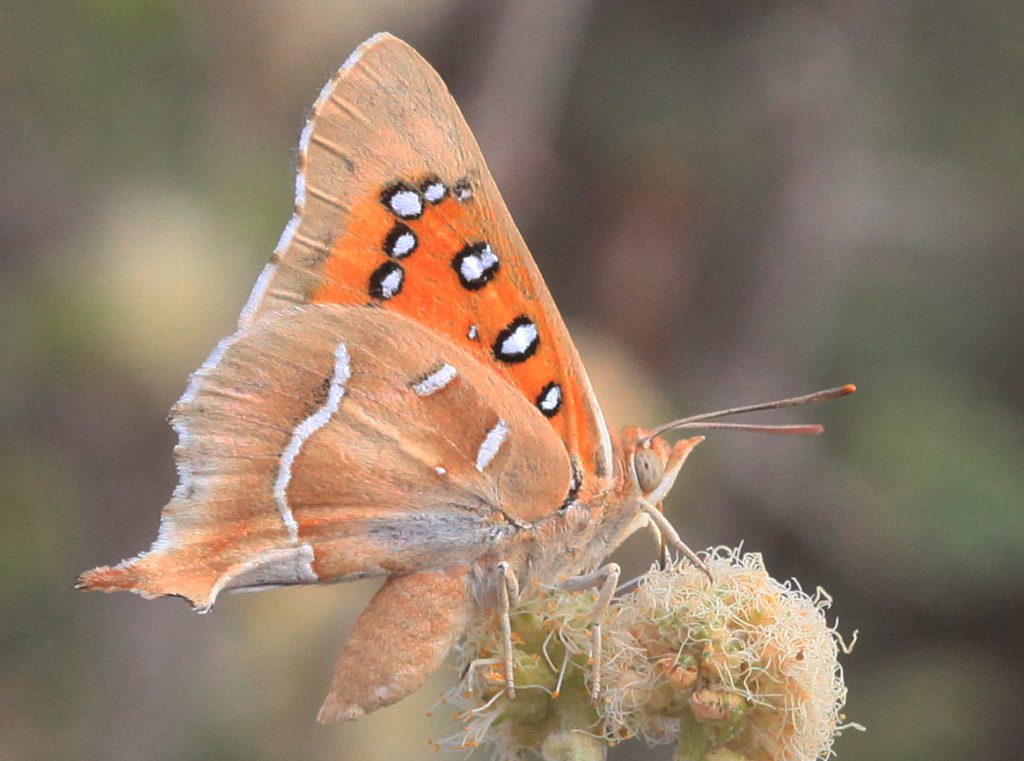 The reserve harbours 75 butterfly species and plays co-host to the migration of Brown-veined white butterflies every summer, one of the most spectacular annual butterfly migrations in the world. For an area with an average rainfall of below 400 mm per annum to host so many resident butterfly species is extraordinary in any global context.

Snakes are elusive creatures but their tracks are often seen on the sand roads that crisscross the reserve. The best places to see Cape cobra and boomslang are the communal nests of sociable weavers where they prey on the eggs and chicks.