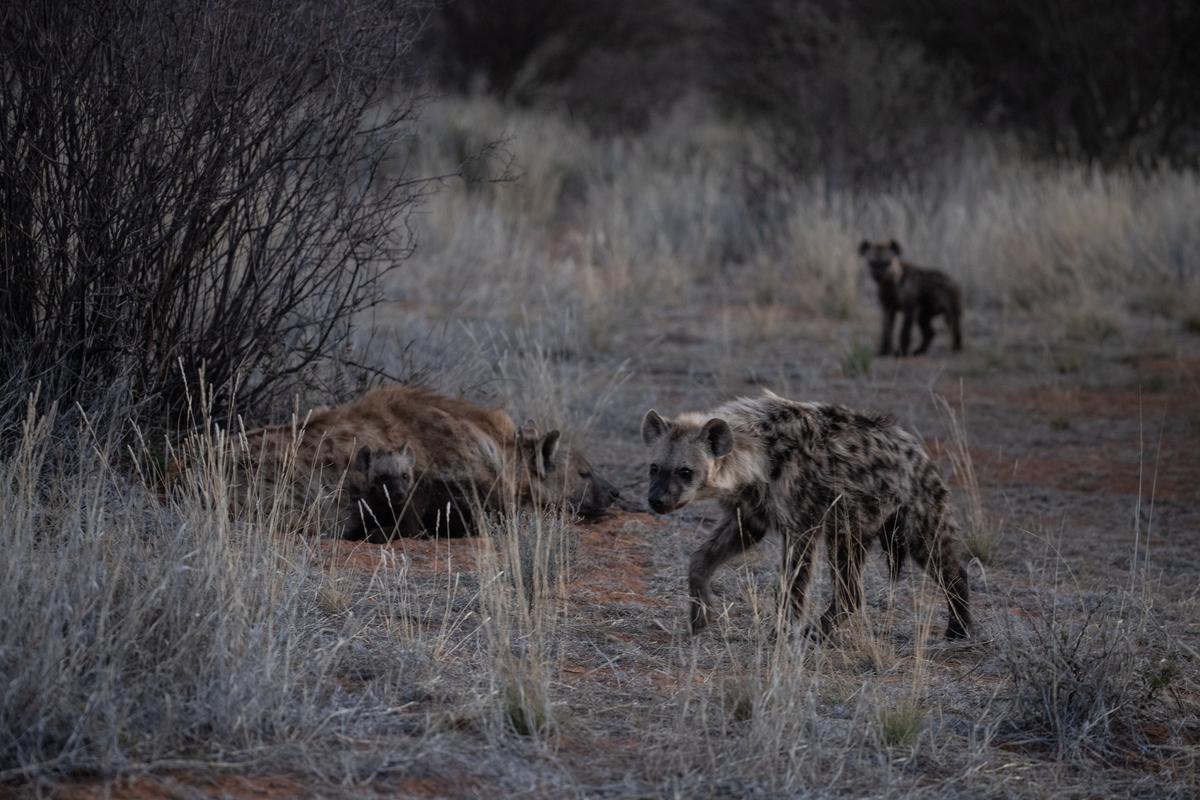 The spotted hyenas reintroduced onto the reserve in 2019 are thriving. Their ability to find food by either scavenging or hunting has led them to do well on Tswalu and to reproduce. Spotted hyenas play an important role in disposing of carcasses, cleaning up the bush after themselves as well as making short work of carcasses discarded by cheetahs, wild dogs and even leopards. 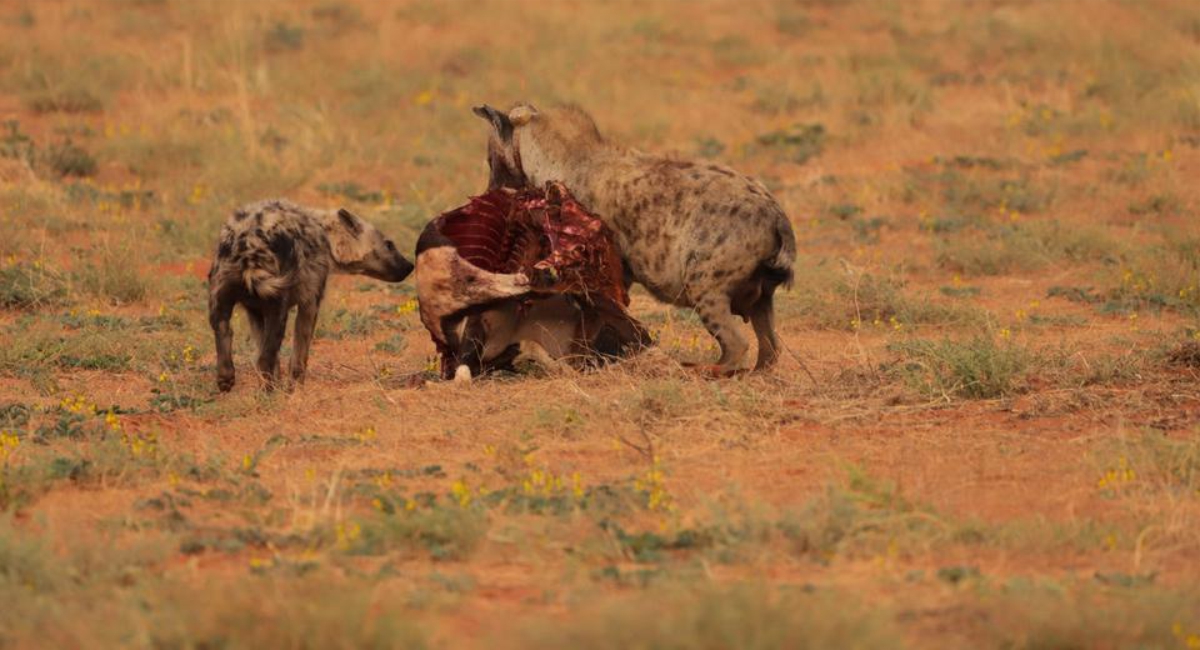 One beautiful and chilly morning this winter, while tracking desert black rhino, my guests and I were fortunate to come across fresh little hyena tracks in the vicinity of an old den site. We followed the tracks and came across what was clearly a new spotted hyena den site close to the older one. Enthralled, we decided to make the trek back to the area later that same day to see if we would be lucky enough to see the cubs. And we did!

We arrived about an hour before sunset, found a spot with a good view of the den, switched off the engine and waited quietly. Not too long afterwards, the first little brown head appeared out of the den’s main entrance. A young cub emerged and looked at us curiously. We were clearly the first humans and the first Land Rover it had ever seen and shyness was the predominant characteristic of this first interaction. But little by little, curiosity took over and the hyena cub ventured out from behind the bushes to get a better look at us. Then, another small body emerged. Though this cub was clearly a little older, his shyness didn’t subside quite like the first youngster and he stayed behind the bushes. We stayed where we were until after sunset, watching the youngsters play, explore their surroundings and harass the adult female tasked with looking after them. Just as darkness was falling, three older cubs arrived back at the den but it was time to leave the area and head back to camp.

Since then, these spotted hyena cubs have become the little stars of Tswalu and a highlight of recent game drives for many of our guests. The second time I went to see them myself, a good month after that first discovery, they were already well habituated to the Land Rover and came right up to my vehicle with wonderful confidence mixed with typical curiosity. These cubs have no idea that their adorable faces have already been shared on social media all around the world. 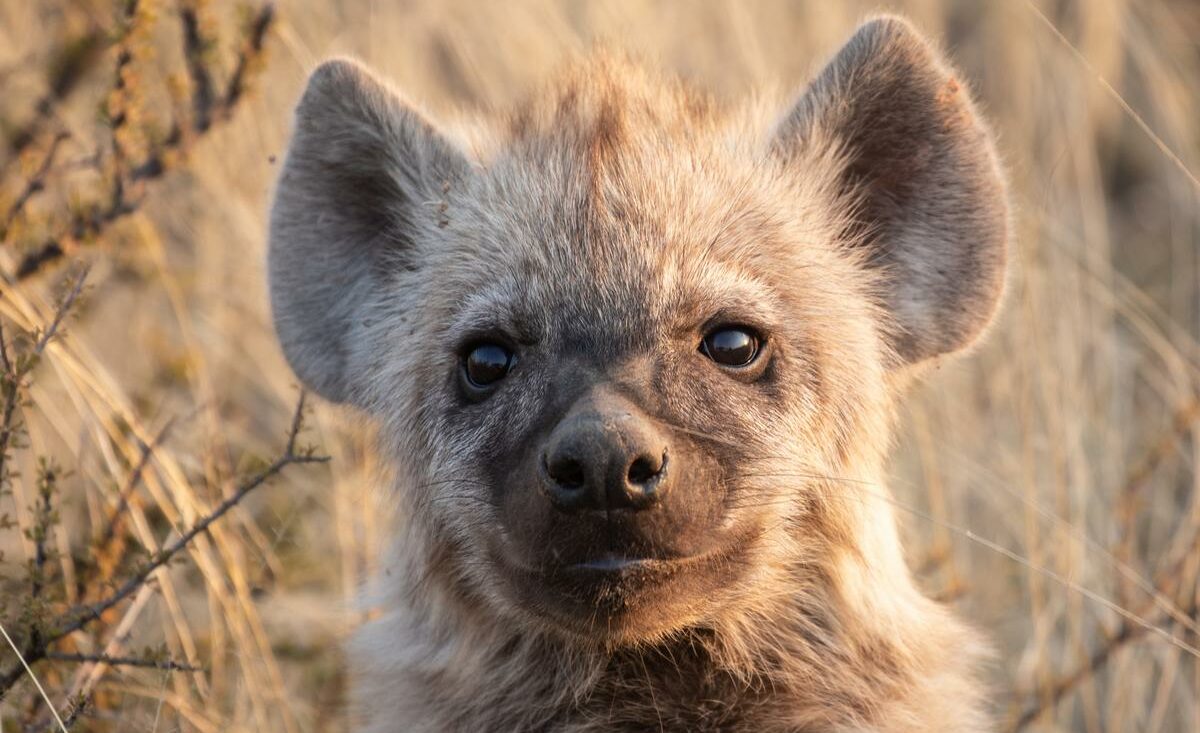 Scavenging hyenas image by Josh Duffus. All other images by Barry Peiser.