Day of the dark cloud 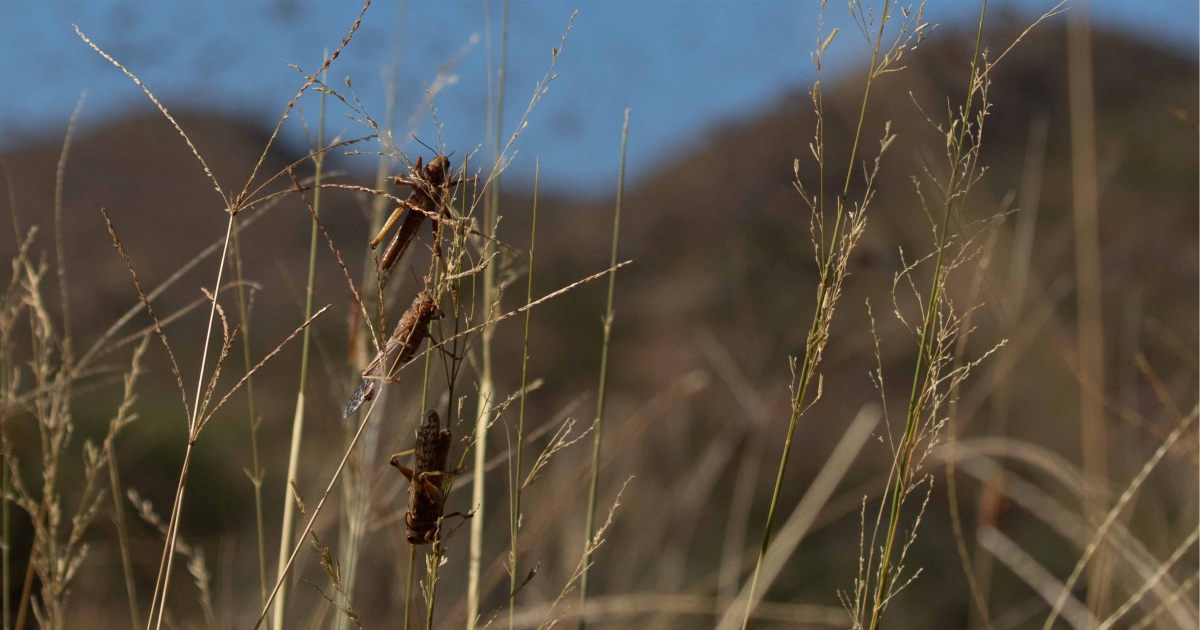 In May I had one of those ‘once in a lifetime’ moments on the reserve, an experience that had to be seen to be believed. The usually blue sky changed colour as a dark cloud drifted across the reserve, moving slowly across the arid savannah and the rocky Korannaberg slopes.

As the cloud drifted closer, I realised that it was actually an enormous swarm of locusts flying towards me. Once the outlines of the first insects became visible, I was able to identify them as Brown Karoo locusts. The cloud kept coming and the swarm of locusts seemed to thicken and intensify.

Suddenly I was in the midst of the swarm, and they were all around me. There were locusts jumping, fluttering and flying away from me, and the sound they created was like the sound of a river running.

The density of the swarm blotted out the sun, and suddenly it felt more like being on the periphery of a bush fire than in the thick of a locust swarm. Locusts were drifting down around me, like ash falling from the sky.

I looked up at the sun, but all I could see was locusts stretching into infinity ranging from up-close, life-size insects to those furthest away, which looked like tiny specks of dust blowing by on the breeze.

It is something I will never forget. To have a swarm of millions of these insects moving over the landscape was phenomenal. Someone else’s nightmare or phobia felt like my good fortune, as I could appreciate the magnitude of such a swarm. In this day and age, mega herds, enormous shoals, and mass migrations of wildlife may not be around to see in the years to come, as humans keep on encroaching on the natural world.

Amazingly enough the swarm didn’t cause much damage to the vegetation. The locusts landed on the vegetation and rested for a while, then continued to fly and move with the swarm. The swarm took two days to move over Tswalu and pass on. I had once seen a BBC documentary of a similar swarm passing over Madagascar, but never thought I would ever experience it myself. As weather becomes more extreme, I wonder whether we will see more natural phenomena like this in the years ahead.

Images and video by Barry Peiser