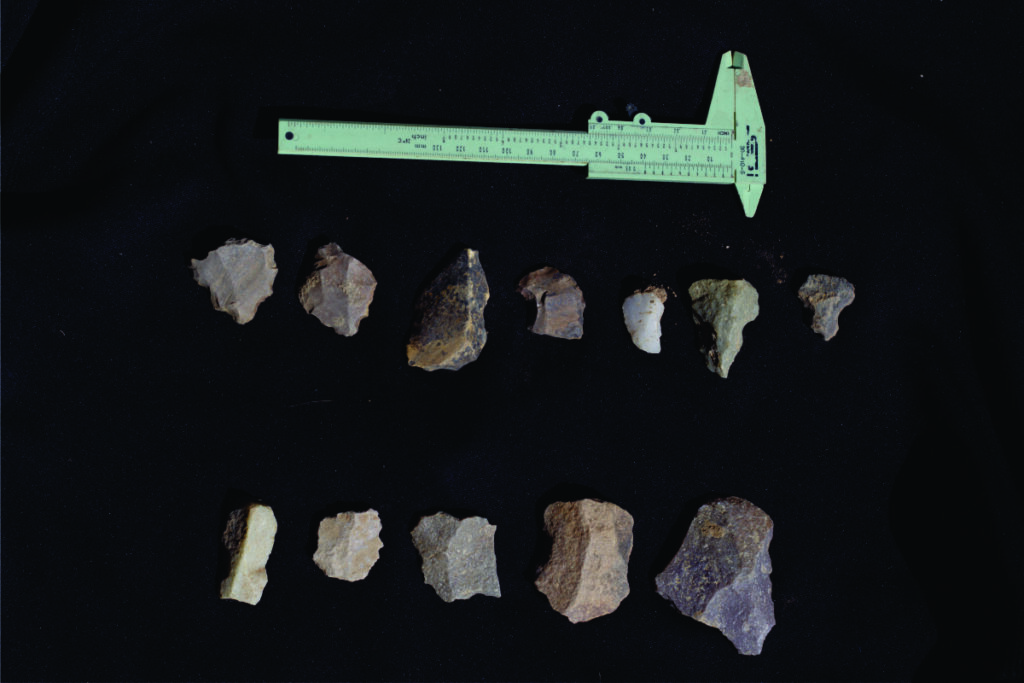 Benjamin Schoville and Jayne Wilkins are working on this long-term project at Tswalu to understand how the southern Kalahari’s unique landscapes were used by early humans. Stone artefacts can be seen on the surface all over Tswalu, some of which may be over one million years old. How did early human ancestors survive in a semi-arid environment? Through ongoing excavations on Tswalu and further east near Kuruman, they are beginning to piece together a record of past human behaviour.

Large stone tools, called hand axes, from the Earlier Stone Age (ESA) are found in many places on Tswalu. These are between 1.5-million and 500-thousand years old and were probably used by early human ancestors such as Homo erectus for butchery of large animals. There are also more recent stone tools from the Middle Stone Age (MSA) that are between 500,000 and 50,000 years old. During this time period, Homo sapiens emerges and evidence for symbolism and new innovations is seen. For instance, the earliest stone-tipped spears are from a site 70 kilometres southeast of Tswalu, near Kathu, and are 500,000 years old.

The team working on this project consists of South African and international researchers working together to understand the history of our species in the southern Kalahari. A variety of approaches are being employed to understand ancient environments. Some calcium-rich limestones, which form during wet periods, lock in isotopes that can be dated. Dr Robyn Pickering and her students at the University of Cape Town are dating these deposits to create a record of wet-dry phases in the region. The sediments excavated so far suggest periods much wetter than today – including large lakes that drew human ancestors to their shores. Dr Irene Esteban at the University of the Witwatersrand is using plant microfossils found in sediments to determine what past vegetation was available. Dr Luke Gliganic (University of Wollongong) and colleagues are dating the sites on Tswalu by determining when buried sand grains around artefacts were last exposed to sunlight through a technique called Optically Stimulated Luminescence.

The conservation narrative at Tswalu would be incomplete without the inclusion of humans and early human ancestors who have been hunting, collecting plants, and finding water here for more than one million years. Tswalu provides a rare opportunity to develop a more complete picture of the ‘Green Kalahari’ landscape on which the ancestors of all humans lived. Our project aims to understand the role the southern Kalahari played for our species’ origins, including the development of innovative technologies and adaptability to environmental change.

Conflict, dread and imagining in the Southern Kalahari