Myrmecophagous mammals in a changing world 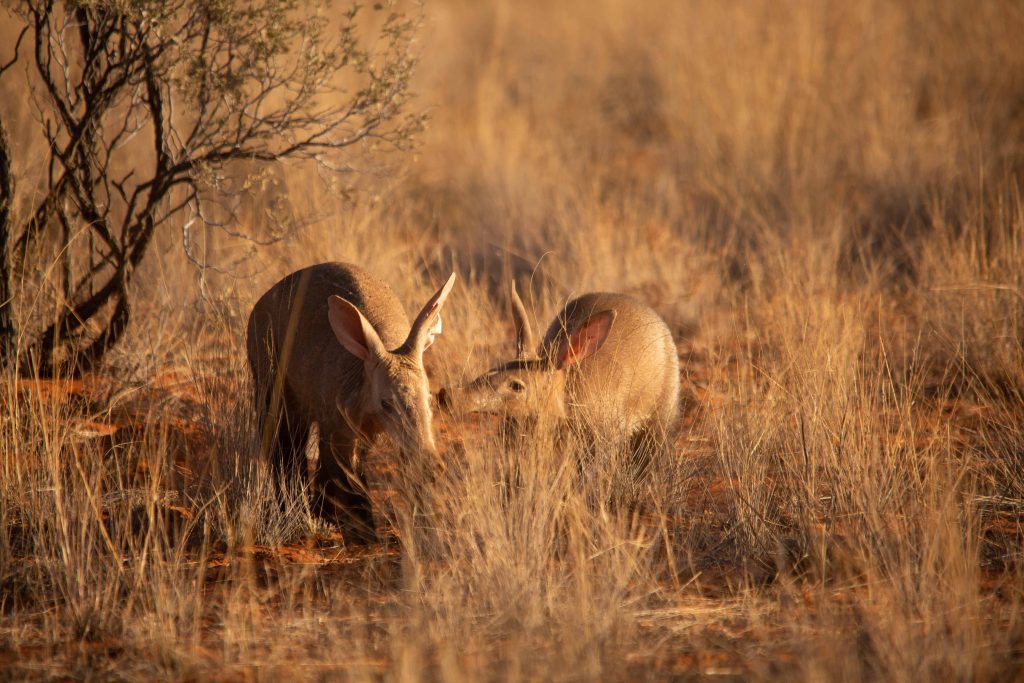 MYRMECOPHAGOUS MAMMALS IN A CHANGING WORLD

This study is observational on free-living aardvarks and ground pangolins at Tswalu Kalahari Reserve. It is focused on population densities, habitat preference, diet and activity patterns of aardvarks (Orycteropus afer) and ground pangolins (Smutsia temminckii) in the Kalahari. PhD candidate Valery Phakoago is under the supervision of Professor Andrea Fuller (Brain Function Research Group, School of Physiology, University of the Witwatersrand), co-supervised by Professor Shane Maloney (School of Anatomy, Physiology and Human Biology, University of Western Australia, Perth, Australia).

Whether southern African mammals will cope with progressively hotter and drier conditions associated with climate change is unknown. Aardvark, a keystone species that provides burrows as refuges to many other species, and Temminck’s ground pangolin, the most traded mammal in the world, are myrmecophagous mammals that specialize exclusively on a diet of ants and termites. Due to the elusiveness and nocturnal habits of pangolins, their actual population size and trends in the wild remain unquantified. Low survival rates in captivity, slow reproductive rates and low natural population densities of pangolins suggest that current illegal trade levels are unsustainable. Our previous work has indicated that aardvarks will be at risk in the face of warming and drying associated with climate change. Research in the Kalahari has shown that aardvark survival is highly dependent on one species of termite, the Northern Harvester termite (Hodotermes mossambicus; Weyer et al., 2020), while pangolins are more dependent on ants than on termites (W. Panaino, unpublished observations). Ant and termite availability decreases during droughts (Weyer et al., 2020), and is likely to decrease progressively with warming and drying in the Kalahari (V Phakoago, unpublished observations). Whether aardvark and pangolins will respond to climate change in a similar way is not known, given their differences in diet and ecological physiology.

The proposed study will thus monitor population fluctuations of both aardvark and pangolins, and correlate changes in populations with abiotic and biotic changes in the environment. In addition to population monitoring, the proposed research will complement our previous pangolin work by extending the investigation into the diet, activity patterns, habitat use, and dispersal of juvenile pangolins, for the first time. Obtaining accurate population densities will allow for better assessments of aardvark and pangolin status in the wild.

Understanding the ecology and population dynamics of myrmecophagous mammals in the Kalahari environment is crucial for improving our conservation efforts of the species through informed management practices. Ultimately, Valery hopes the impact of the research will make a contribution to the maintenance of biodiversity and ecotourism in South Africa.

The secret life of pangolins