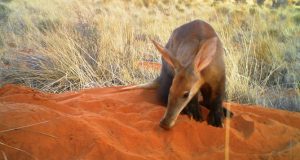 Aardvarks are strange animals. They look like a bizarre hybrid between a kangaroo, pig and vacuum cleaner. They are mostly active at night, smell odd, and live most of their lives in solitude. Aardvarks dig holes in the ground when foraging for their ant and termite prey, and retreat into deep underground burrows during the day. In addition to their subterranean lifestyle, aardvarks are also notoriously shy and elusive.

The fact that little is known about aardvarks was one of the main reasons I wanted to study them, coupled with my interest in researching how animals adapt to harsh environments. Originally from Germany, I had fallen in love with South Africa’s amazing nature and people long before starting my PhD. I also learned that Southern Africa is gradually becoming hotter and drier due to climate change, which is occurring more rapidly here than in many other parts of the world. I thus chose to dedicate my PhD research to investigating the effects of climate change on the aardvark. Aardvarks have an important function as ‘ecosystem engineers’. No other animal in Africa creates as many large underground burrows as the aardvark. When abandoned, these large burrows provide important shelter to many other animals, for raising their young and protecting them from temperature extremes and predators. Aardvarks occur in most environments across their geographic range in sub-Saharan Africa, with the exception of deserts. The southern Kalahari, where Tswalu is situated, is the hottest and most arid region where aardvarks occur, and it is becoming increasingly warmer and drier as climate change progresses.

These extreme conditions can have negative impacts on wildlife. Aardvark burrows may therefore become increasingly important as shelters from heat. But how will aardvarks be affected by climate change? They feed exclusively on ants and termites, but little is known about how these insects will be affected by climate change and in turn what impact this will have on aardvarks.

Tswalu not only lies at the edge of aardvark distribution, but through the Tswalu Foundation it also offered the necessary support and infrastructure for our team to study these animals. To address my research questions, I joined the Wildlife Conservation Physiology team, School of Physiology, University of the Witwatersrand in Johannesburg, under the supervision of Professor Andrea Fuller and Dr Robyn Hetem. Professor Mike Picker, an entomologist at the University of Cape Town, also came on board to provide expertise on the aardvarks’ insect prey. Supported by wildlife veterinarians, we equipped more than a dozen aardvarks with radio-tracking devices and bio-loggers to record their movement and body temperature every five minutes over a period of three years. Throughout this time, I lived at Dedeben, the Tswalu Foundation’s research centre, in order to conduct my field research.

My research tasks involved locating and observing the behaviour of the study aardvarks, placing camera traps at their burrows to record when they entered or emerged, finding their scats for dietary analyses, and surveying the vegetation and the activity and abundance of their ant and termite prey. Data collected included 1.5 million measurements of aardvark body temperature and activity, 40 gigabytes of camera trap footage, and 250 aardvark scats and 5 000 insect traps, in which I counted and identified 250,000 termites and ants to better understand what aardvarks feed on at Tswalu. 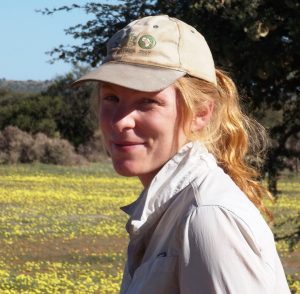 So far, my PhD thesis and a recently published paper reveal that aardvarks are threatened by climate change, with potentially dire consequences for the Kalahari ecosystem in future. I found that aardvarks feed predominantly on northern harvester termites and face nutritional stress when the availability of these termites decreases in drought years. In an attempt to conserve valuable energy stores, aardvarks with insufficient food shifted their activity to the daytime and lowered their body temperature substantially. However, those adjustments were not always sufficient to ensure survival. I am hopeful that our findings will inform future wildlife conservation and management decisions and raise further awareness about the consequences of climate change. I have also joined the IUCN Species Survival Group for Aardvarks to contribute to future assessments for the IUCN Red List of Species. The knowledge I gained has provided a unique perspective in supporting conservation through my subsequent endeavours working for the Intergovernmental Panel on Climate Change, as well as my current role at the Secretariat of the Convention on Migratory Species (CMS) under the aegis of the United Nations Environment Programme (UNEP).

My time at Tswalu also taught me many other things, such as swapping out a vehicle tyre really quickly, safely removing a stray porcupine from my bedroom, and tracking an aardvark’s spoor in the red Kalahari sand for kilometres to locate where it took its bathroom break. Most significantly, living at Tswalu provided me with an understanding of the environmental challenges that Kalahari animals are facing, and solidified my amazement for the animals and plants that are so superbly adapted to this beautiful, semi-arid environment.

All images supplied by Nora Weyer.