Thermal biology and activity patterns of the Cape cobra 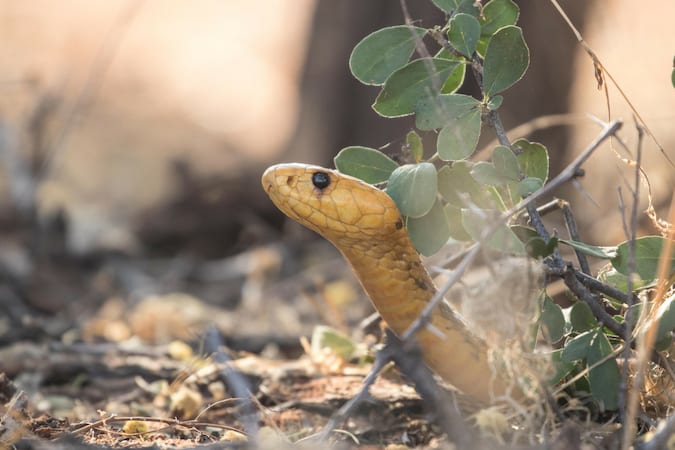 THERMAL BIOLOGY AND ACTIVITY PATTERNS OF THE CAPE COBRA

Predators often have stabilizing effects on ecosystems as they regulate prey abundance. It is likely that snakes perform similarly essential key functions to sustain the integrity of the ecosystem. Thilo Beck’s study of the thermal ecology of Cape cobras using radio telemetry falls under the Kalahari Endangered Ecosystem Project (KEEP). This programme looks at the responses of Kalahari organisms to climate change. Thilo’s two supervisors are Graham Alexander (University of the Witwatersrand, Johannesburg) and Bryan Maritz (University of the Western Cape, Cape Town), both of whom are considered experts in the world of herpetology for their research on behavioural ecology in reptiles. Their current study at Tswalu researches the interactions between snakes, predominantly Cape cobras (Naja nivea) and Boomslang (Dispholidus typus), and Sociable weavers (Philetairus socius).

Since starting the research into Cape cobra behaviour three years ago, Thilo and his supervisors on the project have caught, measured and released 94 different Cape cobras on the reserve. Every single one of them has a miniature ID chip implanted in the body and their measurements (length, sex, location where found, and weight) form part of the database. In addition, about 35 of the snakes have been implanted with radio-transmitters and body temperature loggers with the assistance of a veterinarian. This allows Thilo to follow the snakes in the field and record their body temperature simultaneously.

Through this growing body of data, Thilo aims to understand the cobras’ ecology from a thermal perspective. As ectotherms, snakes generate very little body heat and rely on the environment’s temperature to a large extent. The most effective way for a snake to change its body temperature is through behavioural adjustments. So, if the snake wants to warm up, it moves into sunlight; if it gets too hot, it will move underground or into the shade. The temperature logger implants reveal these behavioural patterns. On a daily basis, the snakes are tracked by Thilo with the help of radio telemetry. He takes coordinates, observes their behaviour, and takes measurements of the environment and the surrounding temperatures. His specific interest is in linking particular behaviours and activity periods to the snakes’ body temperature and the temperature of the environment. This allows him to classify Cape cobra activity remotely by looking at different patterns that emerge from their body temperature. These are referred to as body temperature profiles. Thilo’s goal is to understand the thermal requirements and needs of Cape cobras in the Kalahari to predict how they may cope with hotter and drier conditions in the face of climate change. Comprehending the challenges these snakes face in the Kalahari right now can also provide insight into potential threats many other reptiles may face with temperatures increasing worldwide.

PROGRESS UPDATE AND KEY FINDINGS FROM 2022: