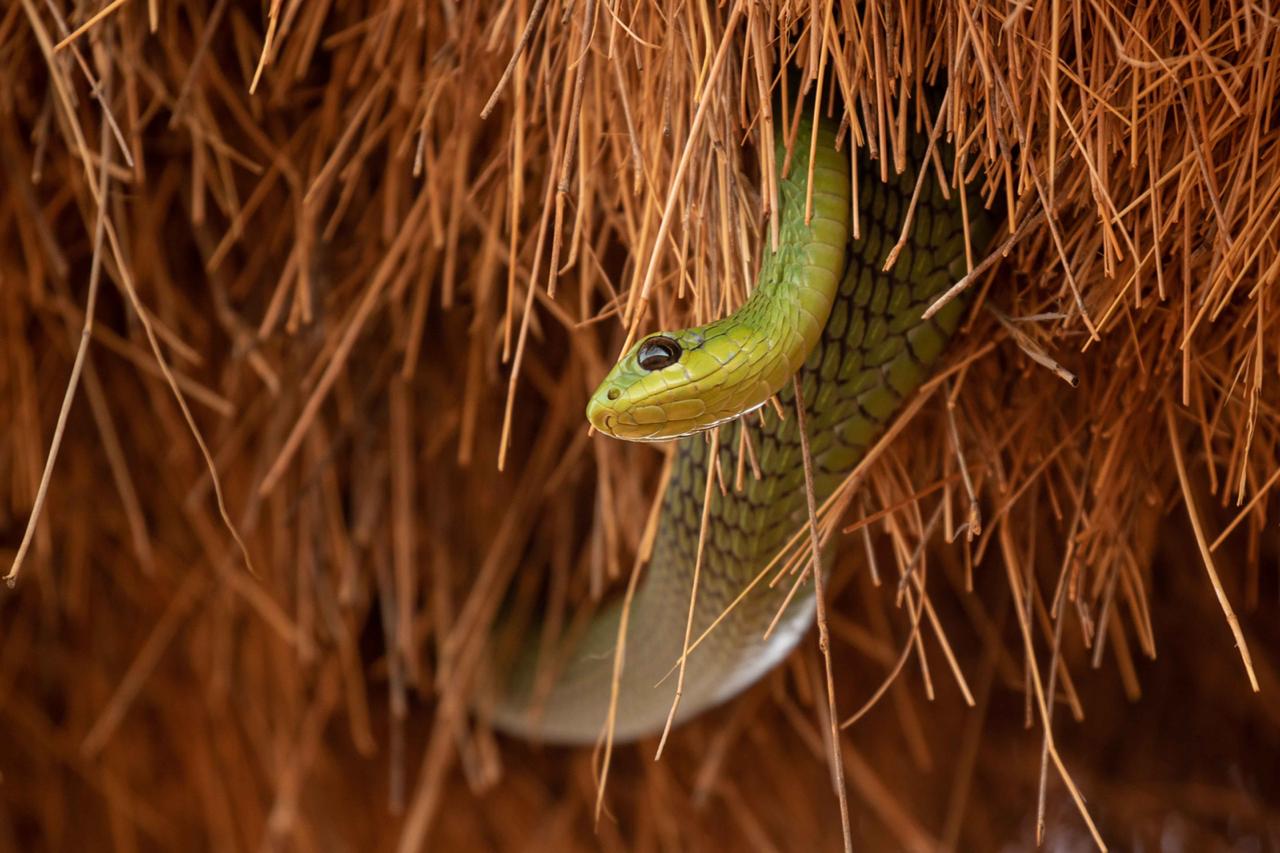 The boomslang (meaning ‘tree snake’ in Afrikaans) is regularly sighted at Tswalu, winding its way through the massive nests of sociable weavers. These magnificent structures consist of various chambers, occupied by mating pairs and their chicks, and are usually built around sturdy acacia trees. The snakes move from chamber to chamber, looking for food, then wedge their bodies into the chamber hole when they find the chicks or eggs they’re after. Then they gorge themselves. Afterwards they often rest for a while on top of the nest or move on to search for more food.

Exceptionally large eyes and an egg-shaped head characterise the boomslang. In this species the dimorphism is colour, and the boomslang in the image is a male. Males have a variety of colour shades from solid bright green to rust-red or a combination of black and yellow. Females are a dull olive-brown or grey colour. Hatchlings and juveniles are grey with a massive emerald green eye, but change to the colours of the mature adult when they reach around one metre in length.

The boomslang is mostly arboreal, spending a lot of its time in trees, and diurnal, meaning it is active during the day. It feeds on birds, nestlings, frogs, lizards and occasionally small mammals.

The boomslang is a highly venomous snake and is back fanged, which means that its fangs are located towards the back of its mouth. When its mouth is wide open, the fangs are visible almost directly below the eye. By comparison, the Cape cobra’s fangs are located at the front of the mouth. A common misconception is that back-fanged snakes, such as the boomslang, struggle to bite a human. This is not true, as the boomslang can open its mouth extremely wide and is able to deliver a potentially lethal bite anywhere on the human body. Its venom is haemotoxic which disrupts blood clotting and causes tissue damage in the body, potentially leading to paralysis, internal bleeding, organ failure or even death.

As a relatively small snake, the boomslang encounters numerous predators including other snakes and large birds such as falcons, kestrels, eagles and vultures. Some small birds may also mob the snake if they feel threatened by it.

The hierarchy of the brown hyena is quite complex, with aggressive rituals dominating relationships. Clans are incredibly territorial, and may cover an area of up to 500 square kilometres.

THE SECRET LIFE OF PANGOLINS

While pangolins are known to be threatened by the illegal wildlife trade, electrocution by electric fences, habitat loss, and road mortalities, very little attention has been focused on how climate change will affect their welfare.

THE IMPACT OF CLIMATE CHANGE

There are few, and possibly no other, studies that have aimed to understand responses of multiple species with an entire ecosystem, making KEEP a unique, ground-breaking project.