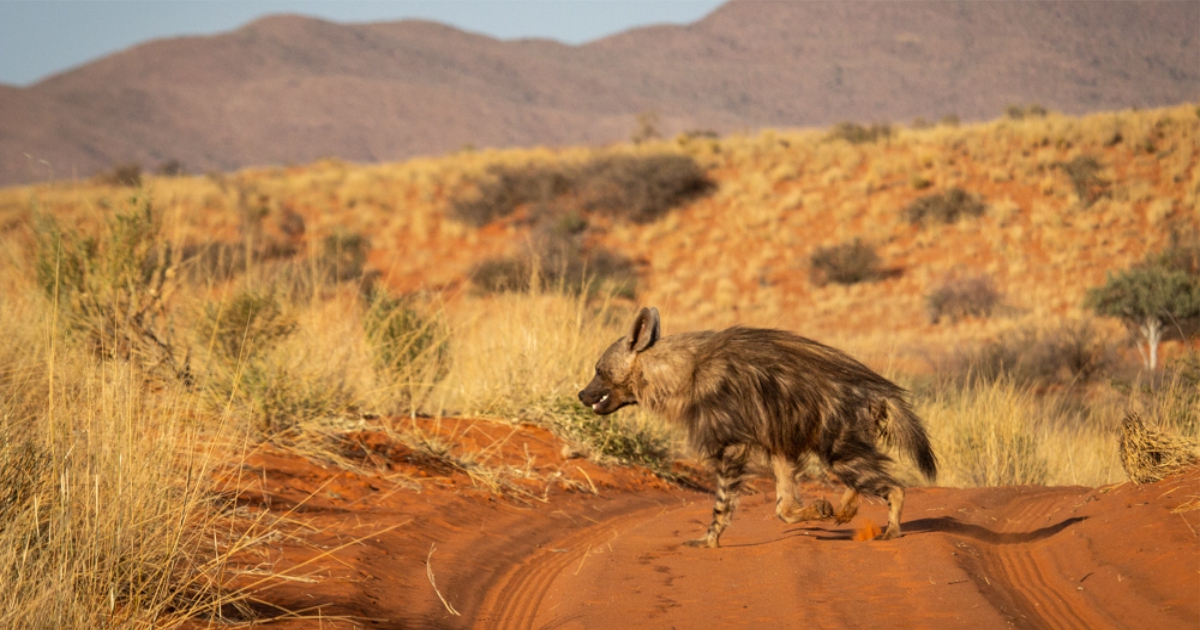 Tswalu Kalahari has a healthy population of brown hyena, even though the exact numbers are unknown. Due to their secretive, shy and elusive behaviour they often go undetected. This species can be observed almost anywhere on the reserve, as they travel far and wide in search of food. Early morning or late afternoon drives are usually the best times to track and find one. Identifying features include a long, shaggy, dark-brown coat, pointed wolf-like ears, a relatively short tail, striped brown-and-white legs, and in adults a visible cream-coloured mane around the neck. When irritated, erectile hairs along the neck and back are raised, making the hyena look more formidable and intimidating. The mane is often damaged in a fight, giving the animal a bedraggled look. Unlike other hyena species, females and males are usually similar in size.

The hierarchy of the brown hyena is quite complex, with aggressive rituals dominating relationships. Clans are incredibly territorial, and may cover an area of up to 500 square kilometres. The clan usually consists of a mated pair and their offspring, but may include several mature males and females. The clan cooperatively defends a territory, but does not forage together. This species is mainly crepuscular and nocturnal, lying up during the day in cover or in deserted burrows. They can travel distances of up to 35 kilometres in a single night, searching and hunting for food. On Tswalu, nomadic males and solitary females that are not associated with a clan are often encountered. These are often animals that have dispersed from their natal clan and are waiting for the opportunity to immigrate into another clan (in the case of males). Females are looking for a vacant area in which they can settle and establish a new clan.

The brown hyena is predominantly a scavenger, with the bulk of its diet consisting of carcasses killed by other larger predators, like lion, leopard and cheetah. Strong jaws are an effective scavenging tool and have the ability to grind through the toughest bones. As a scavenger, the brown hyena has an important role removing the remains of dead animals from the veld, as these serve as breeding grounds for many diseases and parasites if left to decay. They are poor hunters with a very small proportion of their diet comprising of live prey, for example springhares, springbok lambs and ground birds. They are opportunists, and supplement their diet with rodents, insects, ostrich eggs and even desert melons. Eating tsama and gemsbok melons makes them effective in dispersing the seeds of these fruits at defecation sites.

Brown hyenas are non-seasonal breeders and have a gestation period of approximately 90 days. Females give birth to one to four young, which suckle for more than a year and live in a den for up to 18 months. Hyenas learn to battle for food from birth. The female only has two nipples, so from the outset cubs must compete for food. In litters of more than two, the weaker cubs struggle to survive and often die of starvation. Mother’s milk is supplemented with meat from three months of age. At birth they resemble their parents in colour and reach full size by 30 months. Cubs are generally more wary and escape to the safety of their dens when they feel threatened. Around 60 percent of hyena cubs die before reaching adulthood. This can be from starvation or because territorial males are regularly killed by lions.

Tswalu is one of the best places in southern Africa to witness the species in its natural environment. There is no doubt that this is a magnificent, highly adaptive species which is always a treat to observe. Finding brown hyenas at Tswalu is no easy feat, which makes them all the more exciting, mysterious and fascinating.