Help protect a rhino and save biodiversity 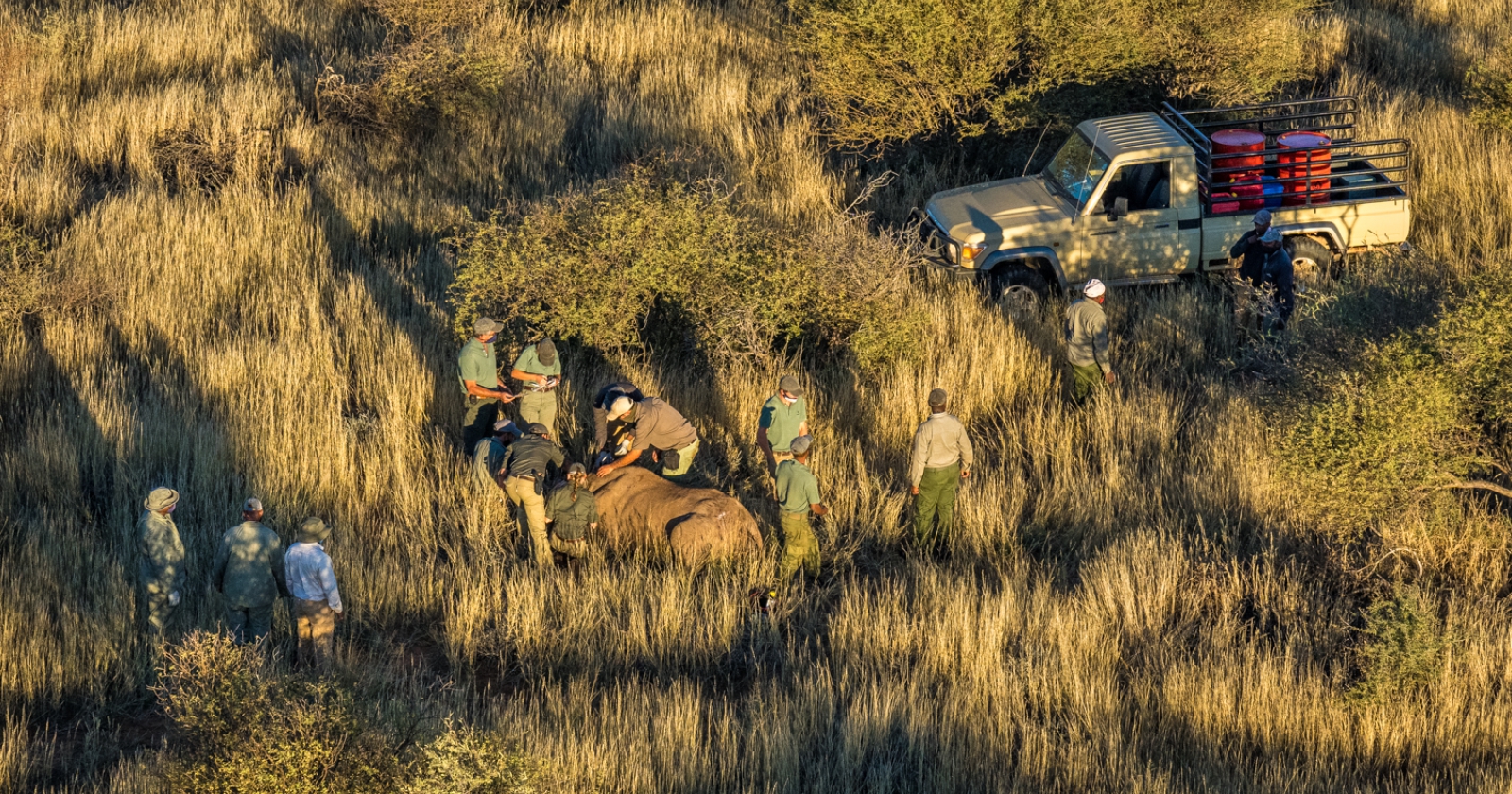 The method involves locating a target animal through tracking on foot and then darting the animal from the air. GPS coordinates for each rhino are relayed to the pilot and the vet on board the helicopter. Once an animal has been darted and is asleep, the team works as swiftly as possible. The procedure is ideally carried out when an animal is between two and three years old (the age at which a calf is ready to leave its mother).  Every young animal needs to be captured at least once in its lifetime to give it the unique ear notch number. The rhino carries this as a lifelong mark so that it can be identified by field rangers on the reserve, who use the markings to record ranging and feeding patterns of individuals and data on breeding that can guide future management decisions.

During the notching procedure, the wildlife team also collects DNA samples for a global DNA database. The database assists with tracking down rhino horns being illegally traded anywhere in the world. Finally, small microchips are implanted under the skin and in the horns for future identification and security purposes.

Guests can book a private notching experience by sponsoring a young rhino, thereby participating in this vital conservation project. A private guest experience is subject to the availability of young rhinos requiring tagging or notching, and therefore cannot be guaranteed. It needs to be requested and booked well in advance.

Darting of rhinos only happens between April and September – the coolest months in the Kalahari. As part of this exclusive experience, guests form part of the ground crew. Guests are invited to get in on the action with the actual notching, insertion of the microchips and body temperature and breathing monitoring while the animal is anaesthetized – an unforgettable opportunity to get up close and touch the animal as it sleeps.

Once all procedures are completed, the vet administers the antidote to wake up the animal. Depending on the conditions on the day, more than one rhino may be located and darted to optimize the time of the capture team. Of interest is the different responses of black and white rhino to the capture. Gus van Dyk, head of conservation at Tswalu Kalahari, says: “Black rhinos go down fighting and wake up fighting whereas white rhinos are usually more relaxed and show less aggression”.

Where opportunity exists, a guest might be able to hop into the helicopter with the pilot and hover overhead to watch the recovery from the air as the animal wakes up and trots off safely back into the wild.

The cost of a private rhino notching experience is currently R90,000 (priced in South African Rands; valid for 2022). The fee covers the costs of a wildlife veterinarian, the specialized capture drugs, and the flying costs. Sponsorship by a guest contributes directly to a credible and vital rhino conservation project, directly impacting the conservation of the species on the reserve. Guest contributions also help fund future relocation and reintroductions to re-establish populations where they can be protected.

The desert black rhino, listed as Critically Endangered in the IUCN Red Data Book, continues to thrive under Tswalu’s protection despite the increase in rhino poaching across Southern Africa. To ensure that the reserve’s rhino population contributes to national conservation strategies, Tswalu works closely with South African National Parks and the IUCN Rhino Management Group to strengthen the depleted gene pool of the subspecies. Without collaboration on a national and even international level, the black rhino population could become genetically impoverished, seriously compromising conservation efforts to bring it back from the brink of extinction.

All images by Marcus Westberg