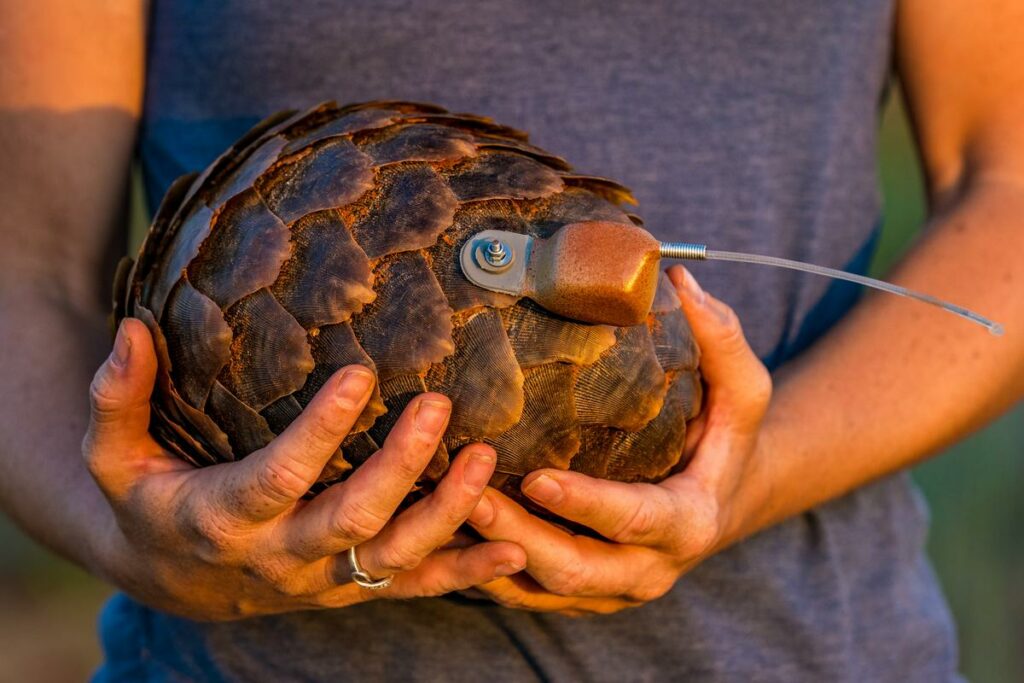 For her PhD studies at the University of the Witwatersrand, Wendy Panaino spent four years investigating the responses of ground pangolins (Smutsia temminckii) at Tswalu Kalahari to seasonal and yearly fluctuations in climatic conditions and food resources.

Ground pangolins are myrmecophagous (ant and termite-eating), burrowing mammals that occur only in eastern and southern Africa, including in the already hot and dry Kalahari region of South Africa. As a result of climate change, regions of Africa, including the Kalahari, are becoming hotter and drier. Such changes can impact mammals directly, primarily by increasing the heat load to which they are exposed, as well as indirectly, for example by impacting their food resources. Whether most mammals will be able to cope with such changes to their environment is unknown.

Pangolins are elusive and predominantly nocturnal animals, making it challenging to study them. Very little is therefore known about their ecology and physiology. With the support of Tswalu staff, the Tswalu Foundation, her supervisors professors Andrea Fuller and Francesca Parrini, as well as an experienced veterinary team, Wendy studied the responses of free-living pangolins equipped with miniature body temperature data loggers and VHF tracking transmitters. She also gathered long-term data on the food resources available to pangolins and investigated what the pangolins ate through behavioural observations and analyses of pangolin scats. By monitoring specific individual pangolins, Wendy has been able to gain unique insights into the lives of one of the world’s most secretive mammals.

Understanding the ecology and physiology of ground pangolins at Tswalu will not only provide insight into how these elusive Kalahari animals may cope in future, but will provide an analogue for how they might respond to climate change in other regions of Africa, where hotter and drier conditions are also becoming more common. The insights gained from the research will contribute to informed decision-making and management practices, ultimately improving the conservation efforts of a species already threatened by habitat loss and the illegal wildlife trade.

PROGRESS UPDATE AND KEY FINDINGS FROM 2021:

Note: In May 2021, we also found a tagged pangolin that had been electrocuted on a fence. This pangolin had a GPS data logger (attached in December 2020), and a body temperature data logger (implanted in 2015). Both data loggers were retrieved, and the data downloaded. The GPS data logger revealed that the pangolin had safely crossed the fence in and out of Lekgaba six times (double fence along the district road means 12 successful crossings) within 22 days. Often, I was not able to locate this pangolin and I had suspected it was moving in and out of Legkaba. It is highly likely that it successfully moved across the double fence many times during the five years that it was tagged. The body temperature data logger revealed that body temperature was successfully and accurately recorded at 5-minute intervals for almost three years. This is very likely the longest, continuous dataset of body temperature for any wild mammal.

When a pangolin sniffed my boot

In conversation with Wendy Panaino

In conversation with Valery Phakoago

The secret life of pangolins