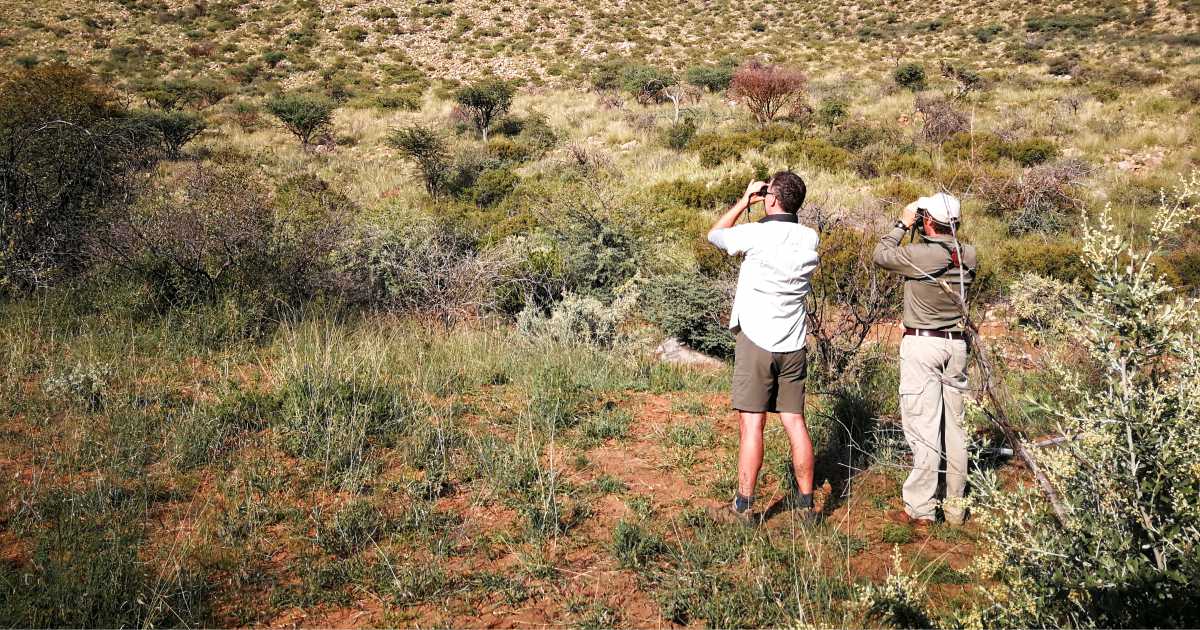 Birders will be eager to discover many of the bird species of the southern Kalahari while at Tswalu. Birding is best done on foot. Setting out in the early morning on a walking safari coincides with the onset of the dawn chorus. Listening to bird calls is always a useful tool to locate different birds.

Early risers include the robust and vocal White-browed Sparrow Weaver (Plocepasser mahali) with its series of chattering and squealing phrases. Cutting through the cool of the morning are the high-pitched, melodious whistles of the Kalahari Scrub Robin (Erythropygia paena).

The rocky foothills of the Korannaberg, where pungent Lavender Fever Berry bushes (Croton gratissimus), shrub-like trees and numerous grass species grow, provide habitat for the elusive and shy African Rock Pipit (Anthus cinnamomeus). Its repetitive and sometime monotonous ‘wheeee-prrrreeeeeu’ call gives it away. It’s also the place to be on the look out for the polymorphic and variable Mountain Wheatear (Oenanthe monticola). The African Red-eyed Bulbul (Pycnonotus nigricans) is often perched on top of a tree, sunbathing in the early morning rays, in these foothills.

Where the quartzite mountains meet the Kalahari’s red sands, larger trees can be found. Buffalo-thorn tree (Ziziphus macronata), which have countless uses based on traditional beliefs, provide shelter and food for both ground-dwelling and arboreal species.  The White-backed Mouse bird (Colius colius) and Cape Glossy Starling (Lamprotornis nitens) are both attracted to the sweet reddish fruits during the summer months. The striking Yellow Canary (Crithagra flaviventris) is a colourful species to tick off the list, but listen carefully for the ‘preep-preep-preep’ cricket-like trill of the Barred-Wren Warbler (Calamonastes fasciolatus), which uses contact-calling while moving through the woodlands.

Keystone tree species, such as the complex Camel thorn tree (Vachellia erioloba), are large and strong enough to support the enormous Sociable weaver (Philetairus socius) nests which can be built to exceed one ton in weight. Sitting patiently under one of these community nests may be rewarded with a close-up of one of the smallest diurnal raptors in the region, the Pygmy Falcon (Polihierax semitorquatus). The Pygmy falcon makes use of one of the many chambers of the Sociable weaver’s nest.

Dotted around the vast plains are Shepherd’s trees (Bosica albitrunca) with their distinctive whitewashed bark. These large trees provide the perfect spot for birds like the Golden-tailed woodpecker (Campethera abingoni), which creates a five-centimetre wide hole in a large branch or trunk in which to build its nest. These nests are later used by other species, such as the Acacia Pied barbet (Tricholaema leucomelas) or the Pearl-spotted owlet (Glaucidium perlatum). These treed areas are also favoured by the Southern Yellow-billed Hornbill (Tockus leucomelas), which moves from tree to tree with bouts of flapping and gliding.

Silver Cluster leaf trees (Terminalia sericea), which provide cool cover for multiple species at rest, are typical of the ancient and undulating dune fields. The dune streets are dominated by a tangled mess of Three-thorn shrubs (Rhigozum trichotomum) while grass species run up and over the crests of the dunes. Groups of up to 20 Scaly-feathered finches (Sporopipes squamifrons) are a typical sight in the tangled undergrowth, while the melodious whistles and canary-like trills may give away the location of a Fawn-colored Lark (Calendulauda africanoides).

To the west, water pans attract flocks of up to 50 birds at a time, sometimes circling several times before landing. Burchell`s Sandgrouse (Pterocles burchelli) and Namaqua Sandgrouse (Pterocles namaqua) use these pans for a quick drink an hour or two after sunrise. Some flocks fly up to 60 kilometres in a day to access water sources like these pans. Namaqua Doves (Oena capensis) and Ring-necked Doves (Streptopelia capicola) are also frequent visitors to the life-giving water. Set in open landscape, these busy pans provide ideal hunting conditions for birds higher up on the food chain, such as Red-necked Falcon (Falco chicquera), Greater Kestrel (Falco rupicoloides) and Gabar Goshawk (Micronisus gabar).

Whether wandering over rocky hills, strolling through grassy plains, cresting a red sand dune or just waiting it out at a watering hole or pan while sipping on coffee, birding on foot is always a rewarding way to spend a morning on the reserve.