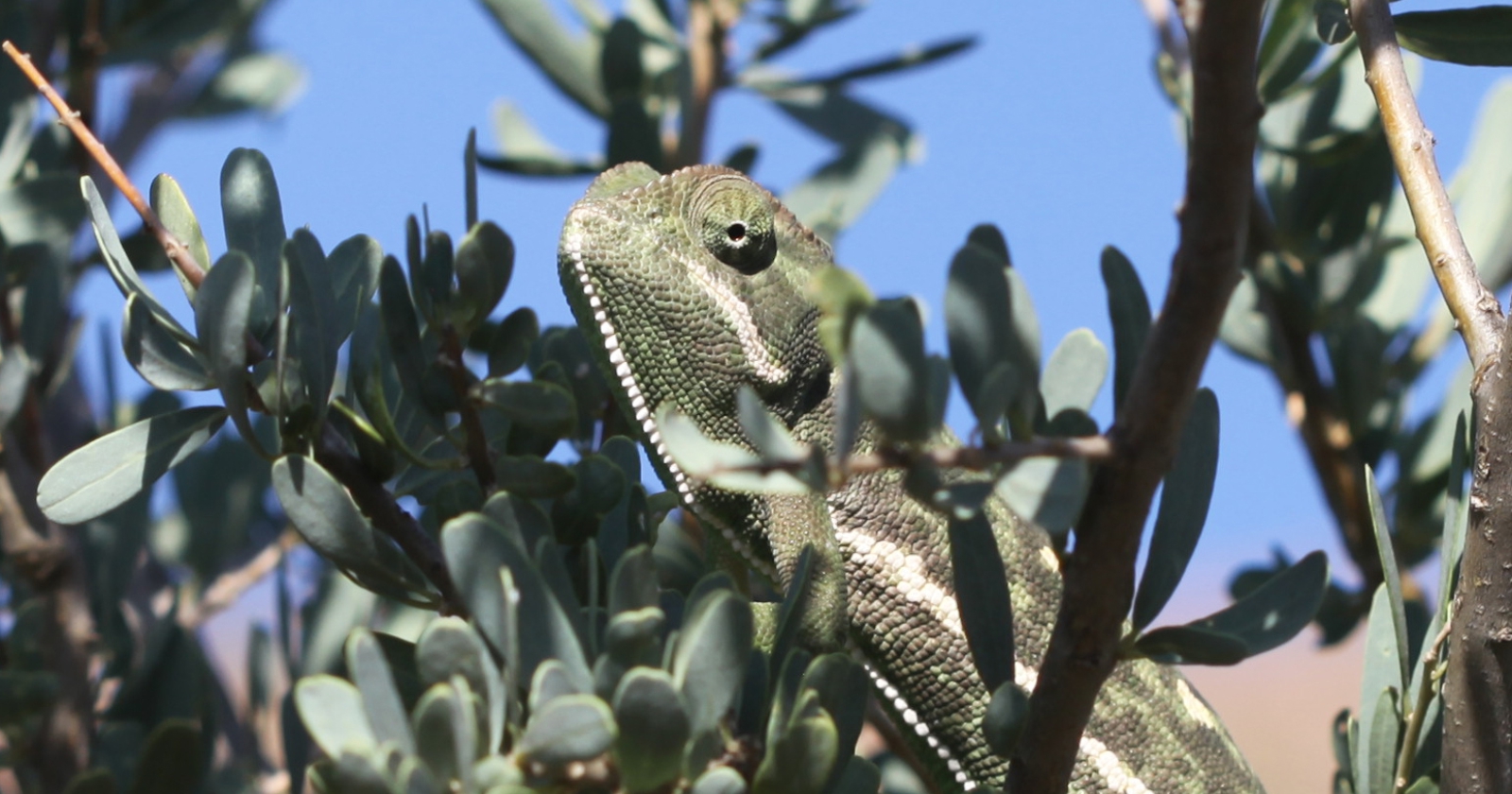 In 2013 I started a project, initiated by the Tswalu Foundation, on the Pioneer Caper White butterfly (Belenois aurota) at Tswalu. Before I arrived to begin my research, I was hoping that there would be enough shepherd’s trees (Boscia albitrunca) to do fieldwork on for the purposes of this study. In hindsight, I have to smile. As I discovered, there are more shepherd’s trees on the reserve than anyone could do several lifetimes of research on.

The elegant Pioneer Caper White butterfly (Belenois aurota), also referred to as the Brown-veined White, makes up the clouds of butterflies that sometimes grace the face of southern Africa in summer. These butterfly migrations are part of annual migrations which are more pronounced in some years than others.

Butterflies are good botanists. The Pioneer Caper White is not a pest as it does not destroy edible crops. Its larvae only make use of host plant species of the Capparaceae family, such as the shepherd’s tree. The Tswana name for this tree is Motlopi – hence this species also being referred to as the Motlopi butterfly.

In the northern Karoo and southern Kalahari, which includes Tswalu, the shepherd’s tree is undoubtedly the main host plant species (food plant of the larvae or caterpillars) used by Pioneer Caper White butterflies. Indeed, the current research has confirmed that Tswalu Kalahari is distinctly a source area for the butterfly migration, thanks to the large number of Boscia albitrunca trees on both sides of the Korannaberg mountains.

For the ecological study I started to mark individual shepherd’s trees, which included 30 GPS-mapped trees north of Dedeben Research Centre. At each of these trees I recorded the presence of flowers, fruit, new shoots, new leaves, leaf damage, stripping of the leaves, the number of butterfly larvae and the number of butterfly pupae. Abundance classes (which are estimated numbers in certain brackets, for example less than 10) were used for this base study, because counting the precise number of flowers or larvae for each tree would have taken far too long!

In the beginning, when I visited these trees, I would check that I had relocated the correct tree by using its GPS coordinates. As the project progressed, I started to recognise the individual trees by their distinct shapes, their location in the landscape, by the vegetation around them or even events associated with them. Instinctively I began to name each tree, adding these names to the record sheets for easier reference. This process enhanced the efficacy of the surveys. Some of the names given to individual trees during the course of the research included ‘At the Termite Mound’, ‘Wise One’, ‘Ragged’, Thumbs Up’, ‘Island in the Stream’, ‘On the Edge’, and ‘Low Big Shade’.

Sometimes the name I’d given to a specific tree changed, and this is where it gets interesting! One full-moon night, while doing night surveys of caterpillars (larvae), ‘On the Edge” changed to ‘Chameleon’. This name change happened because I saw a beautiful, big chameleon on the tree in the moonlight. That same night, while still in awe of the chameleon sighting, it took me a while to make out the shape of a leopard beneath the next tree in line for observation, just a few metres away from where I was standing.  This is when the ‘Low Big Shade’ was renamed the ‘Leopard’. While slowly backing away, I was also clicking away on my camera, my torch trained on the leopard. Needless to say, these photos will never win any awards but serve as a wonderful memory of that night under the full moon. The following morning the big tracks of the young male leopard were still visible in the loose sand in the shade of the shepherd’s tree.

By repeating these shepherd’s tree site surveys from 2013 to the present, some fascinating patterns have emerged. For example, the ‘Wise One’, an old tree with a big trunk, undergoes distinctly less defoliation by larvae, compared to other trees in the same area. The nearby ‘Ragged’ tree, by contrast, is regularly almost entirely defoliated but continues to produce many visible new shoots from the larger branches every summer, which gives it a consistent scruffy and ragged look.

The full analysis of the Boscia-butterfly interactions in the wild at Tswalu is underway. For the purposes of the analysis, the ‘Ragged’ may seem like a trivial name for the tree coded B albi 25. Perhaps the ‘Wise One’ seems irrelevant for the tree coded B albi 28. But it turns out these colloquial nicknames are perhaps of more than trivial importance, because they recognise that each shepherd’s tree is a unique little ecosystem all on its own.

Reinier F. Terblanche is currently an ecological consultant, a PhD student at the University of Stellenbosch, a research fellow at UNISA and a member of the Lepidopterists’ Society of Africa. He has co-authored several books and has discovered and described several new butterfly species in South Africa.