SUMMER, AN UNPREDICTABLE SEASON IN THE KALAHARI 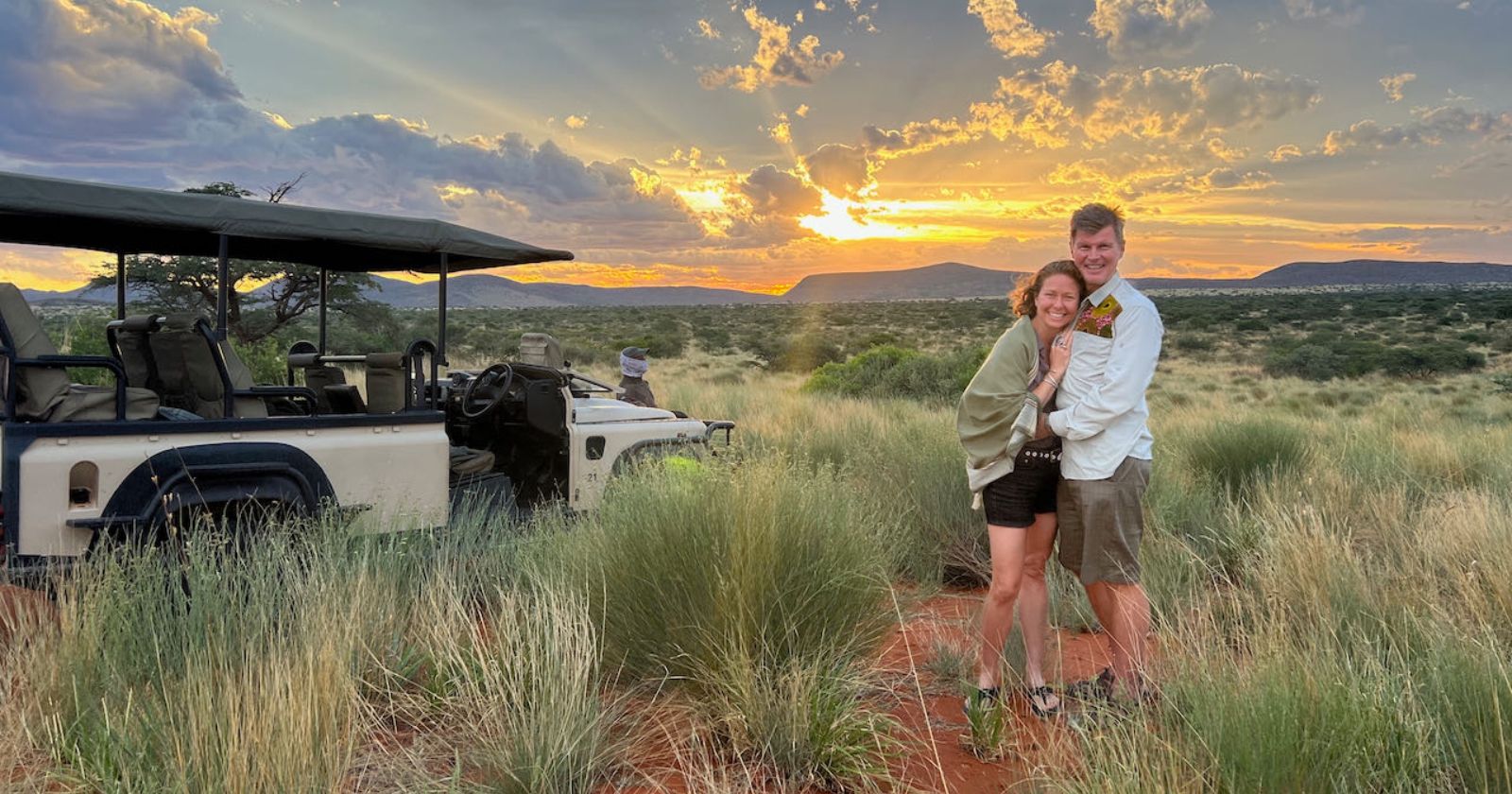 Home / Our stories / Experiences / SUMMER, AN UNPREDICTABLE SEASON IN THE KALAHARI

Perceptions and expectations of seasons, from weather patterns to temperature fluctuations, from when seeds germinate and flowers bloom to when leaves fall and hibernation occurs, are in flux the world around. I see the changes in my backyard, in Boulder, Colorado. I know about the changes being studied and documented at Tswalu Kalahari where the Kalahari Endangered Ecosystem Project (KEEP) is doing groundbreaking research on climate change and its environmental impact.

I’ve been fortunate to spend time in the Green Kalahari in both November and December, a time when guests would think to pack tanks and t-shirts only. While often that is sufficient, wool sweaters and multi-layers are also needed especially when summer storms roll in. This past December, while spending four nights at Tswalu with my husband, Johann, a cold spell and epic storm rolled through, which made for the most magical landscape photography.

We still enjoyed sunny days and dips in the pool after a workout in the Motse’s gym, and lazy afternoons napping on our private, shaded day bed. However, we were surprised by the need to make use of the blankets on our private safari vehicle on top of our sweaters and jackets. Don’t get me wrong, this is unusual weather for a time of year that is typically warm. It was not the see-your-breath, glove-and-beanie weather typical of a Kalahari winter, but let’s just say the meerkats came out notably later in the morning while waiting for the sun to break through the clouds and warm them up.

The unseasonable cold was a hot topic though when we met with two of the KEEP researchers out in the field, Thilo Beck (concluding his PhD on Cape cobras) and Grace Warner (studying microclimate habitats). Although I was not about to sign up for any hands-on work with Thilo, which guests have done in the past, I was keen to learn more about the Sociable weaver nests that play an important role in his research. I was also curious to ask Grace about the increasingly sporadic and intense weather patterns in many places, and how her work is helping to decipher which flora will be most useful in protecting the fauna affected by this. On a different day, we met with lepidopterist Reinier Terblanche who is studying the butterflies of Tswalu (nearly 80 unique species at last count) for his PhD. While Johann was most intrigued with the ant association needed for some caterpillars to metamorphose into butterflies, I was interested to learn about the migration that drifts across Tswalu between January and March. During the migration, multi-billions of butterflies create clouds of colourful wings – a photographer’s dream.

The past two years have taught me that flexibility is key and that the more unattached I am to an outcome, the more things will unfold naturally. On this trip, I began to understand the essence of Tswalu’s ethos to encourage guests to experience the reserve in a slower, more immersive way. Tswalu is a place to appreciate that the smallest things may actually be the biggest, to be patient, stay calm and safari at your own pace!

On a previous visit, my mother and I had spent a perfectly peaceful night at the Malori. With Johann, I wanted to experience the new Naledi star bed. Stormy winds blew away those plans and instead we embarked on a leisurely but productive game drive with our private guide and tracker, which included some epic endangered species sightings, an introduction to the benefits of African cabbage, or Cleome gynandra, which is harvested for the menu at Klein JAN, and a sunset so spectacular I felt like I had stepped into the imagination of a Surrealist on psilocybin.

While I’ve been blessed to see many of the so-called elusive nocturnal species at Tswalu, Johann still has a few that have eluded him. So, the next evening, to satiate my husband’s animal-viewing appetite, we planned a midnight picnic to go in search of aardvark. Unfortunately, the weather didn’t play along and, instead, we ended up by the fire at the Motse. Before we returned to camp, our guide stopped the vehicle and we sat there in silence, watching the sky spark up and crack open all around us in awe of percussive beats and a light show more impressive than a Rolling Stones concert, which is why I called my videos of it “Paint It Black”.

Tswalu is just as much about the boscias and butterflies as the lion and leopard (tortoises). Some of my most memorable moments were watching a Rainbow jewel bug climb up a blade of grass and having a playful sub-adult lion toy around with a leopard tortoise a foot from our vehicle. I’ve come to realize during the first year of my fourth decade that I want to slow down and stay longer in fewer places, without always having to be on the move. Tswalu provides a necessary respite from normal life (healing massages, healthy food, serene spaces) while enabling a profound respect for the natural world (time with researchers and at sightings, always with remarkable guides). After a hike up into the Korannaberg mountains to see ancient San bushman etchings, I realized just how timeless this property is, spanning back centuries, looking forward to the future, all while allowing me to stand still and take it all in.

Brooke Berlin has been exploring Africa for 15 years and has been to 19 of the continent’s 54 countries, some multiple times. She promotes travel to Africa, supports conservation and community non-profits, and loves Tswalu Kalahari. It was on her first trip to Tswalu that her now husband proposed at the Malori. With a degree in journalism and cultural anthropology, she brings awareness to the diversity and uniqueness of Africa.