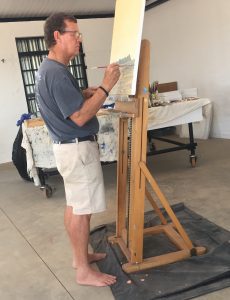 Landscape artist Bruce Backhouse described his experience of being an artist in residence at Tswalu Kalahari as a ‘once-in-a-lifetime’ opportunity. It was a chance to paint for days on end without interruption. ‘For an artist, the most amazing gift is to have big chunks of concentrated time. This is what artists thrive on,’ explained Bruce. On arrival at Tswalu, he recalls being confronted by the graphic landscapes. ‘I’d never seen anything like it before. It was brutal. From the mountains through to the dunes, from the vertical to the horizontal landscape. I spent many hours studying the horizon – that point where the sky and the earth meet.’

He described his first couple of days on the reserve like opening a new book. ‘I started slowly, and then developed confidence and grew bolder. The bolder I became, the faster I worked. I soon realised that I was going to run out of canvases and had to get a dozen more flown up from Johannesburg. Wherever I turned my head, there was a painting.’

Every day Bruce rose early, at first light, either to ride his bike or take a walk. He would then head back to the studio to paint until midday. The studio was big enough to divide the space into sections for watercolours and oils. He took to switching between the two, often working on canvases simultaneously. Sometimes he started in watercolour, then changed over to oils. Most days after lunch he took a nap in front of whichever canvas he was working on. ‘I’d lie down on a camping mattress, staring unfocused at the canvas on until I drifted off to asleep. When I awoke, it would be the first thing I’d see. This technique helped me to access a lot of subconscious stuff before I resumed working.’

In the late afternoon, he would head outdoors again, often with a sketchbook under his arm. He also took hundreds of photographs, but preferred to work from memory. A couple of weeks in, Bruce was flown over the reserve in a helicopter, which he said changed his whole point of view. He came back to the studio and painted over almost everything he had started.

Bruce stayed at Dedeben Research Centre – an artist amongst all the scientists – and got to know many of the researchers through shared meals, discussions and several impromptu trips into the field. ‘I was struck repeatedly by the broad mindedness of it all, the fact that a place so focused on conservation and research also placed immense value on art and artists.’

Bruce’s work is characterised by layer upon layer of oil paints in a riot of earthy colours. ‘Some are 20 layers deep. I paint with different sized brushes, and use different brushstrokes. If you run your hand carefully over one of my paintings you’ll get a callus,’ he laughed. The paintings are representative of the often brutal and dramatic semi-arid savannah of the southern Kalahari.

‘The Tswalu landscapes are highly complex, unique and varied. From clean skies that change daily, to rugged rolling mountains, to seemingly flat dunes that stretch on into a haze of white light. As elusive as I found Tswalu, I found it as stimulating. I definitely left a bit of my heart in that place.’

The body of Bruce’s work from his time in the Kalahari was the subject of a solo exhibition with Everard Read Gallery, The Clarity of Wilderness – Tswalu, which was launched on their digital platform during the national lockdown in South Africa in June 2020

As a fellow member of The Long Run, Tswalu is working towards improving its sustainability goals with the help of a full-time sustainability officer, Prince Ngomane.