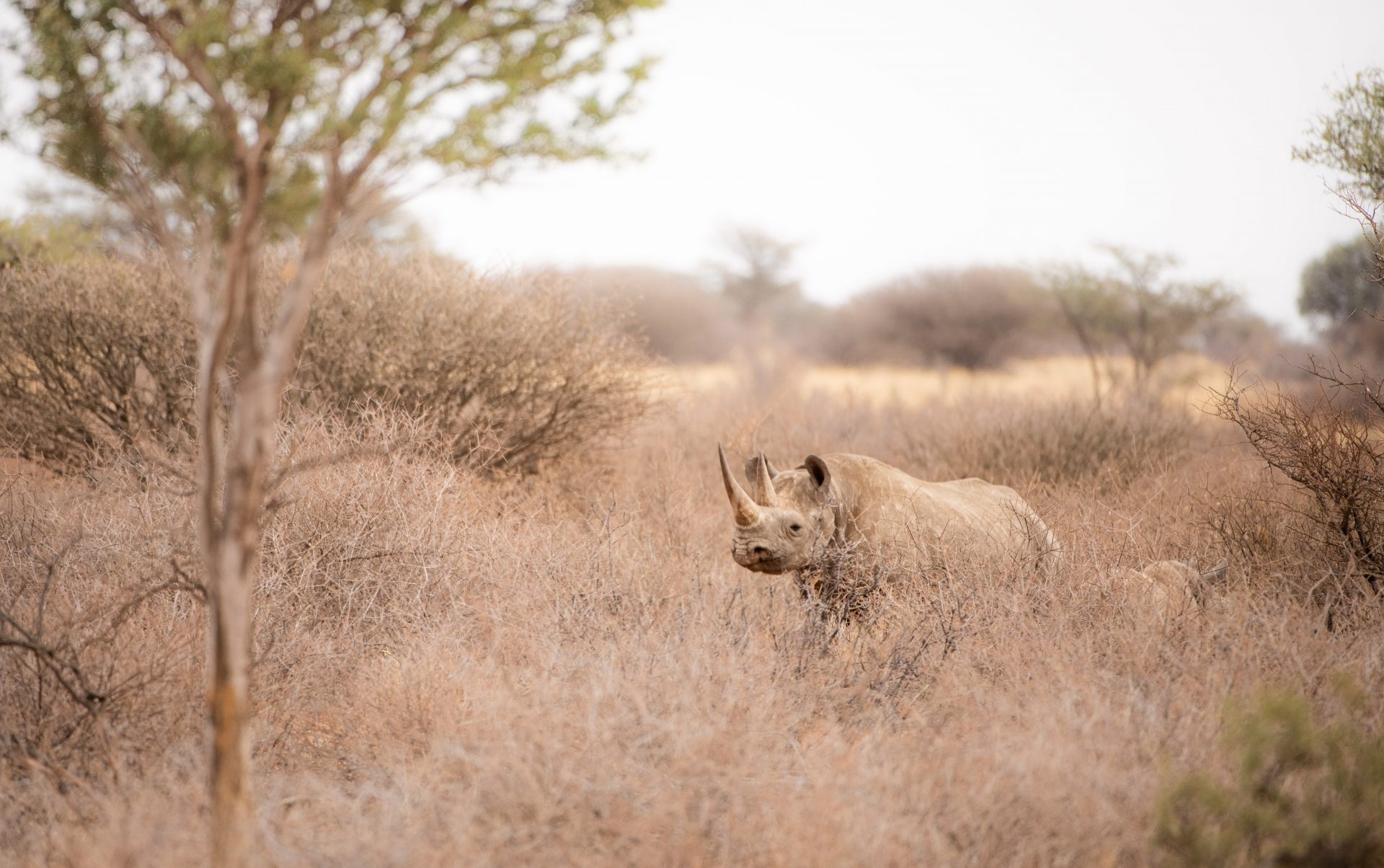 Tswalu Kalahari Reserve is regarded as one of Africa’s great conservation stories, not only through the preservation of the southern Kalahari’s diverse habitats but also the protection of many rare and critically endangered species. One such species is the Desert black rhino, an important sub-species first introduced to Tswalu 25 years ago from Etosha National Park in northern Namibia. Very few rhinos survive outside national parks and reserves due to persistent poaching and habitat loss. Maximising population growth rates of the Desert black rhino, in order to aid species recovery, remains at the core of Tswalu’s conservation mission.

Conservation strategies on the reserve are informed by on-going research, facilitated through the Tswalu Foundation. Individual rhinos on the property are tracked daily and identified by their unique ear-notch patterns. Understanding the behaviour, intraspecific interactions, home range, and levels of aggression between individuals have all been key to the success of this ambitious project. A rigorous understanding of rhino ecology on the reserve ultimately aims to maximise metapopulation growth rates, thereby minimising the loss of genetic diversity and mitigating the impact of poaching. Crucial to the success of building such a population is the ability of individual rhinos to disperse to new areas, without which growth rates decline.

Tswalu has also been instrumental in establishing new populations, and maintaining genetic diversity across existing populations, elsewhere in South Africa. A PhD study, completed by Jo Shaw, investigated the habitat use in the black rhino population on Tswalu The reserve’s potential to support a particular population size took into consideration the seasonal availability of food resources and focused on maintaining body condition for maximum reproductive success.

Recording behaviour characteristics and ecological tolerances of the Desert black rhino are important in conserving and building a population. This species is specially adapted to temperature extremes, and they can withstand heat and cope with temperatures below freezing. A degree of nocturnal behaviour enables them to avoid the heat of the day.

A Desert black rhino’s range can span over 200 square kilometres, which is twice the distance of other rhino sub-species in South Africa. It moves swiftly, reaching speeds of over 55 kilometres per hour, and is surprisingly quick footed. This enables it to turn sharply to run right through bushes and scrub when required.

Interestingly, these rhinos will defecate in one spot repeatedly and create dung piles to mark their home range. They will also scent mark their territory by rubbing their scent gland against a tree or rock. They can be quite vocal and will make a snorting or sniffing sound when disturbed. Grunting is a typical form of communication between group members.

Desert black rhinos have poor eyesight and appear to struggle to focus at a 30-metre distance. This species has shown a clear preference for Acacias in habitats across their range, although they have been recorded browsing 36 different plant species on Tswalu. It is important to note that the quality and quantity of food available in the late dry season ultimately determines the number of individuals and their breeding success.

By closely monitoring the habitat capacity of the species, in terms of the key resources required to maintain healthy numbers, Tswalu continues to be a leader in the protection and conservation of rhino in South Africa and remains a major role player in ensuring the survival of the species.

Primary health care for all

Tswalu’s health care centre provides free primary health care services not only to all staff and their families on the reserve but to anyone in need in the remote, rural communities surrounding the property.

While Tswalu guarantees a private vehicle and dedicated, experienced guiding team with every booking, those who are really serious about taking wildlife photos will appreciate the introduction of a fully equipped photographic safari vehicle and specialist guide.

Tswalu Kalahari Reserve is regarded as one of Africa’s great conservation stories, not only through the preservation of the southern Kalahari’s diverse habitats but also the protection of many rare and critically endangered species. One such species is the Desert black rhino.