FIVE BIRDS TO TICK OFF AT TSWALU Home / Our stories / Conservation / FIVE BIRDS TO TICK OFF AT TSWALU

Are you interested in birding, but perhaps have no idea where to start? My interest in birding began when I started working as a field guide, and once I’d grasped their entertainment value I became hooked. Learning bird calls was the quickest way to recognise more species and add them to my list. Here’s a brief introduction to five birds I never tire of seeing at Tswalu. 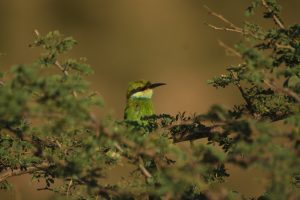 An eye-catching green, yellow and blue bird that is usually seen perched on the side of bushes, looking for potential prey. This species is a vagrant during the non-breeding season winter. I still see some of them on the reserve throughout the year. As its name suggests, the bee-eater’s diet consists of bees and its thin, pointy beak enables it to grab almost any flying insects in mid-flight. Once it has caught its prey, the bee-eater returns to its perch to devour it. Colourful plumage ensures species recognition and the attraction of a mate. They are occasionally cooperative breeders. A burrow is excavated by both sexes. Usually in a low sand bank or in abandoned aardvark burrows. In the breeding season, both parents incubate and feed the chicks. 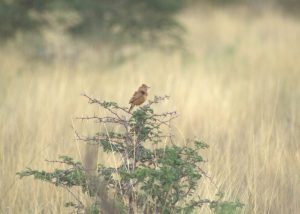 Fairly common and near-endemic to South Africa, this medium-sized lark should not be overlooked as a typical LBJ (little brown job). Its coloration is an adaptation to blend into open grasslands to avoid detection by predators. A ground feeder, the Eastern Clapper Lark feeds on insects and small seeds. In winter this bird keeps a low profile. In summer, once the breeding season begins, testosterone levels in the male surge and he becomes very vocal as he establishes his presence and defends his territory. He also transforms into a show-off to attract a potential mate. He does this by flying sharply up into the sky, clapping his wings together vigorously below the body and whistling at the peak of ascent, about 30 metres above the ground. The display is repeated every 15 to 30 seconds for 10 minutes or more. A domed cup nest is concealed under a tuft of grass where these birds successfully raise chicks while evading predators. 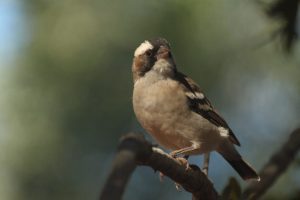 Sparrow-weavers are cooperative breeders, a social system that supports one breeding pair. Dominant birds retain status as long as they survive. The breeding pair and up to 10 helpers build individual nests in a loose colony in a thorn tree like a camel thorn. One nest is for breeding, the others are for roosting. Individuals within the colony help with rearing the young. The group is territorial, vigorously defending feeding territory within a 50-metre radius of the nesting tree. Like most weavers they feed on insects and seeds, but also eat fruit and leaves. 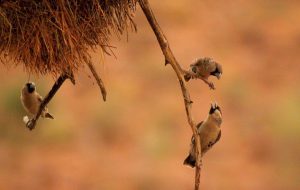 One of the few bird species you will find only in the Northern Cape’s semi-arid savannah and Northwest province of South Africa. Sociable weavers have a unique nesting system. Colonies of up to 500 birds are found in a nest made entirely of sticks and grass that may exceed one ton in weight. Seen all over Tswalu, these enormous nests can be used for over a decade. They are complex, mammoth systems, holding countless birds, insects, mammals and reptiles that all benefit from the communal living arrangement. It’s not unusual to see them flying in a flock of up to 50 or more birds, foraging and searching for nesting material which is brought back to maintain the nest structure. One of the perks of the nest is insulation from the southern Kalahari’s extreme temperatures. In winter it can be as much as 10 degrees warmer inside the nest, or 10 degrees cooler in summer, compared to the ambient temperature outside. 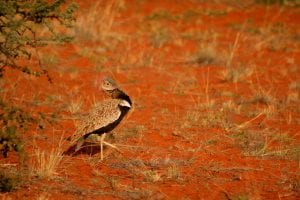 Predominantly a ground dweller, the Red-crested Korhaan only uses flight to display, evade predators or to move to feeding grounds. A cryptic, arrow-like pattern on its back helps it to blend into the grassy environment and keeps various predators fooled. In the breeding season the male shows off with an eccentric, thrilling display, known as the rocket display. He flies up sharply 30 metres above the ground, throws himself backwards, before dropping vertically out of the sky with wings closed, as if shot.

One of the biggest advantages about birding, as opposed to most other animal spotting, is that you don’t have to go on safari to see them. Their migratory patterns are far reaching and fascinating. Start by identifying birds in your garden or in the city in which you live. It’s accessible to anyone, anywhere. Follow Tswalu on Instagram for more about birds, every week.