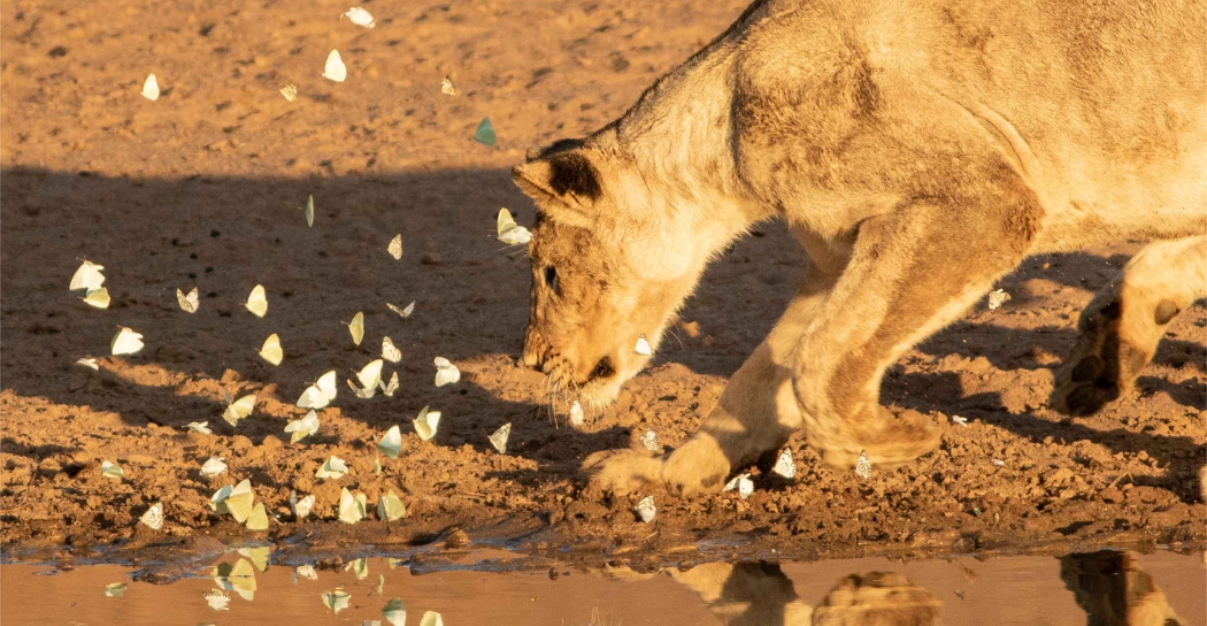 The reserve is a sanctuary for species that are endemic to the southern Kalahari, and also provides habitat for quite a number of species typically found in the Karoo. This remarkable diversity exists because of available indigenous host plants for the larvae, or caterpillars, of the butterflies, which somehow persist in the driest of times.

Little was known about host plant use by butterfly species in the wild, especially in remote regions such as the southern Kalahari. The establishment of the Tswalu Kalahari Butterfly Research project, supported by the Tswalu Foundation, in July 2013 has provided a deeper understanding of butterfly landscape ecology in Africa. The project also informs environmental management on the reserve from this unique angle.

Butterflies flourish due to the presence of suitable host plant species in appropriate micro-habitats. The larvae of many species are highly selective, feeding on only one or a few indigenous host plant species. If these specific plants are not present, the larvae will die. Many butterflies would become locally extinct if their host plants were removed or replaced, which emphasises the importance of protected wilderness areas like Tswalu.

Tswalu is also a source area for the Kgalagadi Butterfly Migration when clouds of butterflies drift across southern Africa in late summer.  The term, Kgalagadi Butterfly Migration, was introduced at the 10th Oppenheimer Research Conference, held in 2019, to refer to one of several regional butterfly migrations and dispersals across southern Africa. The Kgalagadi migration originates in the northern Karoo and southern Kalahari before spreading across the western and central interior of southern Africa, crossing into Namibia, Botswana, Zimbabwe and other parts of South Africa.

There are at least 10 butterfly species that consistently take part in this migration route, including Belenois aurota (Pioneer Caper White/ Brown-veined White) and Catopsilia florella (African Migrant). Tswalu is an important source area for both migrant species.

As a result of the butterfly research project undertaken on Tswalu, the concept of source areas that sustain butterfly migrations was first established. Specific host plant species, that sustain millions of butterflies, were identified as source areas on the reserve (Terblanche, R.F., 6th Oppenheimer Research Conference, 2015).

Some butterfly species at Tswalu only occur in small localized areas and live underground for a large part of their lives. These species belong to the genera Aloeides (Russets) and Crudaria (Silver-spotted Greys). The caterpillars go underground where they live in ant’s nests during the day. At night they are accompanied by the protective ants to their particular host plant species where they feed. They even pupate in the ant’s nests. Each species has its own, very specific ant species (often only one) with which it is associated. This is why these ‘underground’ butterflies only occur in certain spots where both the suitable host plant and the specific attendant ant are present.

Because of territorial behaviour some butterflies are regularly found some distance away from their host plants. Fascinating territorial behaviour, known as hilltopping, is noticeable in the Korannaberg mountains on the reserve. The males of certain species secure territories on the hilltops to attract females. They will defend the perches, rocks or grasses where they choose to settle with vigour, chasing after any male ‘intruder’ that passes by. While working on the Tswalu Kalahari Butterfly Project, it was found that some species visited the hilltops earlier in the day while others only arrived after teatime in the afternoon, like the Silver-spotted Warrior Copper (Argyraspodes argyraspis), almost like scheduled arrivals and departures at an airport. The tactic of territorial hilltopping to attract a mate is usually taking place when concentrated displays of butterflies are observed whirling around at the tops of the Korannaberg hills.