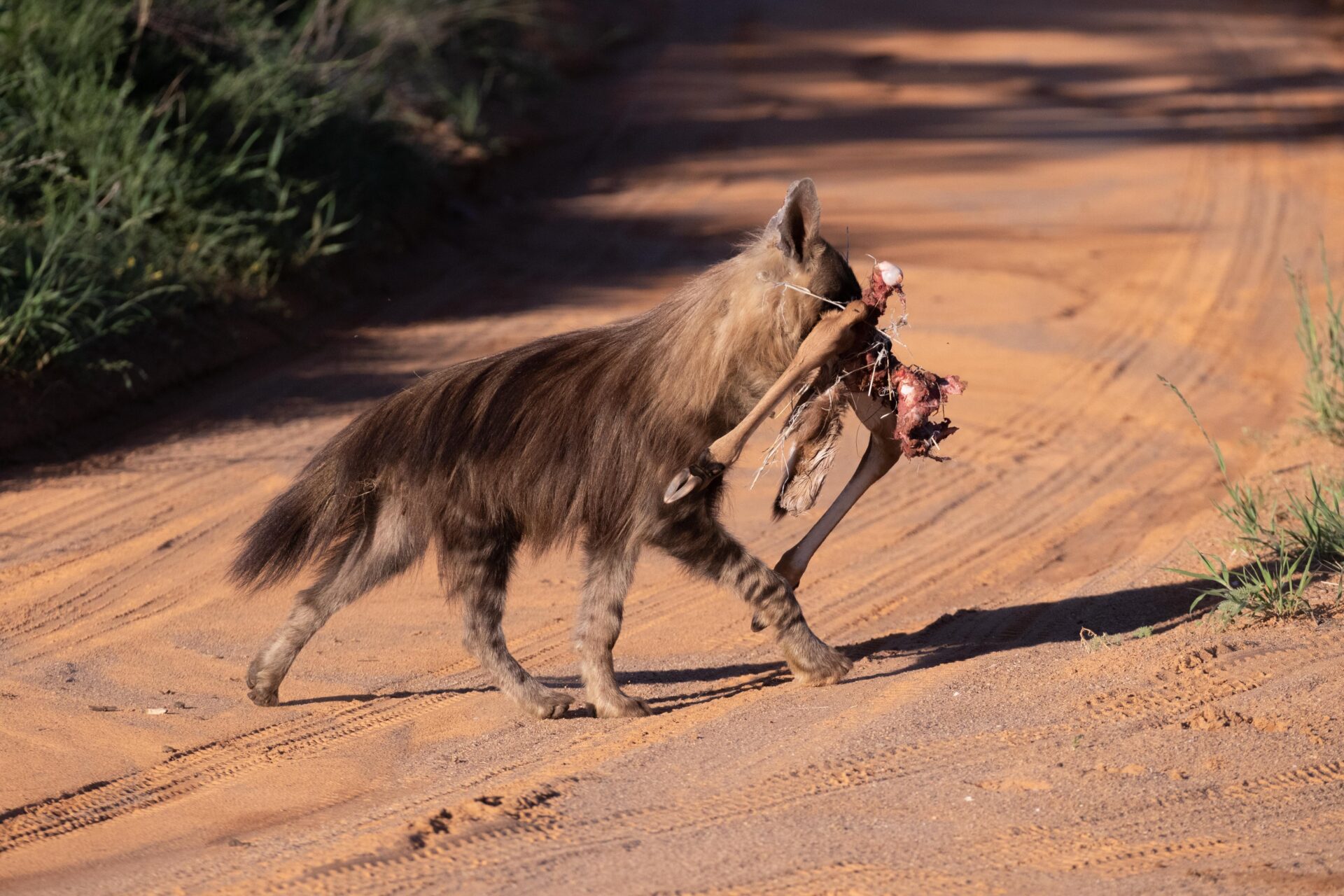 Lucien Beaumont, an experienced private guide and a familiar face at Tswalu Kalahari, recently spent a few days on the reserve with guests. One of the highlights of their safari was a brown hyena sighting involving a pair of cheetahs.

Brown hyenas are capable of making their own kills but will resort to scavenging when the opportunity presents itself – as it did that day.

Jackson Sebake, the sharp-eyed tracker teamed with Lucien and his guests on the vehicle, had managed to track and find a pair of cheetahs feeding on the remains of an unidentified antelope kill in very thick bush.

Lucien had just manoeuvred the safari vehicle closer to the feeding cheetahs when he heard a rustling in the bushes nearby. Initially he thought it was a black-backed jackal, as these jackals are known to follow cheetahs to scavenge off the remains of their kills.

To everyone’s surprise, a brown hyena emerged into the clearing and charged straight towards the cheetahs who abandoned their prize and left the remains to the bold scavenger.

Don’t be fooled by a brown hyena’s shaggy, bedraggled coat. When disturbed by larger predators or confronting a competitor, erectile hairs along the animal’s neck and back are raised to create a formidable, larger-than-life silhouette. The ability to make themselves look bigger than they really are gives them the edge when competing with lions, cheetahs, leopards or spotted hyenas in the Kalahari.

“Brown hyena, especially at Tswalu, are generally nocturnal and shy but in this instance it ignored the presence of our vehicle, overcome by the opportunity of a free and easy feast!” said Lucien.

Brown hyenas are known scavengers, but will prey opportunistically on small mammals and young antelope as well as invertebrates and fruits when larger prey is scarce. Read more about Brown Hyena conservation at Tswalu here.

“We watched the hyena feed for a few minutes before it picked up the carcass and staggered off, presumably to feed undisturbed. It may also have been carrying the food back to its den to feed its cubs.”

Evidence yet again that some things in the bush remain a mystery, but every sighting can be savoured in the retelling back in camp, through photos and in our memories.