SMALL THINGS AND THE BIG PICTURE 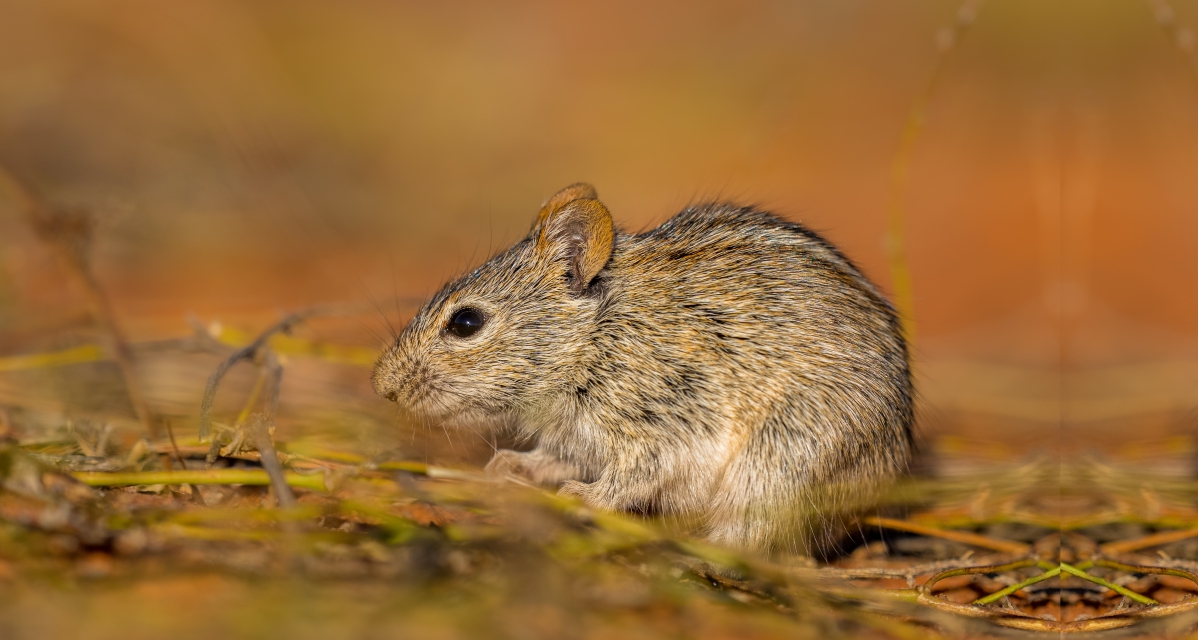 Home / Our stories / Conservation / SMALL THINGS AND THE BIG PICTURE

The tiny furball was dwarfed even by the small metal ruler, almost disappearing in Dr Nico Avenant’s gloved hands as he attempted to measure its hindfoot, a mere 25 millimetres. The entire length of the body was perhaps three times that, its weight no more than 25 grams. It wasn’t the gerbil’s diminutive size that caught my attention, however, but the amount of detail I was able to observe. The reddish-orange fur on its back. Its whiskers. The tufts of hair on its feet and toes distinguish this species, unsurprisingly named hairy-footed gerbil (Gerbilliscus paeba) from its many cousins. Measurements carefully noted by Avenant’s colleagues, Ronny Nokha and Tshediso Putsane, the gerbil scuttled off into the tall grass.

We tend to associate size with importance, both in terms of the role something plays in the world and how impressed we ought to feel in its presence. This certainly applies to wildlife, and understandably so. After all, who doesn’t experience a mixture of awe, humility and trepidation during encounters with fully grown elephants, rhinos or lions? It is also easy for us to see how even a single member of such species can impact its surroundings, whether by uprooting trees or by virtue of being an apex predator.

Our affinity for size is reflected in our conservation efforts, often spearheaded through fundraising pleas to protect tigers, pandas, elephants, orangutans and rhinos. The same can be said for wildlife tourism. Safaris are advertised as an opportunity to see the Big Five; very few overseas travellers book safaris to see mice, beetles or flowers, no matter how rare or beautiful these might be. Even in the case where the main attraction lacks physical largess, their iconic nature – Tswalu’s meerkats and pangolins come to mind – tend to overshadow many other, equally interesting creatures. So, though I get as excited as the next person whenever I see a leopard or a giraffe, I nevertheless want to make a case for the many overlooked – but no less fascinating – members of the animal kingdom. Including gerbils.

I arrived at Tswalu excited but without expectations, keen to explore an ecosystem I had not encountered before: the Green Kalahari. Given the sheer size of the reserve, I soon realized that I had two choices. I could spend hours driving around in search of lions, cheetahs and rhinos, or I could let myself be fascinated by whatever we happened to come across. The latter, in addition to taking some pressure off my guides – “you’ll be hosting a professional photographer” isn’t necessarily good news – meant that I never returned to camp feeling as though I’d missed out.

Wherever we looked, life abounded. Ground squirrels went about their grooming routines, spiders repaired damaged, dew-decorated webs, geckos scurried over the sand in search of insects, butterflies dried their wings in the early morning sunshine and armoured ground crickets did… well, whatever it is that armoured ground crickets do. We would sit and watch weaver birds building their precariously dangling nests, stop the car for hard-working dung beetles or ignore a cheetah sighting in favour of an iridescent rainbow jewel bug. And that is to say nothing of the beauty and complexity of the Kalahari’s plant life, from camel thorns to morning glory flowers, which provided plenty to see and photograph at every turn of the sandy road.

A sad but undeniable reality is that humans and livestock outweigh the world’s wild mammals by approximately 25 to one. Not all that long ago, the reverse would have been true. The world is still dominated by small creatures, however. Insects outweigh all mammals – us included – and there are approximately 10 quintillion of them. (That’s a one followed by 19 zeroes, which is rather a lot.) They would be absolutely fine without us, but Earth’s ecosystems depend entirely on them and the even more numerous plants, fungi and bacteria. As do we.

This brings us back to gerbils. You see, even though we outweigh all the world’s wild mammals put together, we certainly don’t outnumber them. Of the more than 6000 species of mammals, 40% are rodents, including 110 species of gerbils. Rodents provide crucial ecosystem services, dispersing seeds and spores and converting plant matter into animal protein, which is a slightly fancier way of saying that they eat plants and are in their turn eaten by predators such as owls, jackals, snakes and serval cats. Most rodents are considered keystone species – just like elephants and lions – which means that many other species depend on them for their survival. And yet, how many of us ask our guides about gerbils?

The day I spent with Nico, Ronny and Tshediso was probably my favourite at Tswalu, despite stiff competition from meerkats, pangolins and brown hyenas. Checking 200 (harmless) traps, making our way across the landscape on foot, we found seven different species of small rodents and three adorable sengis (formerly known as elephant shrews). As the three researchers gently weighed, measured and released the tiny animals, Nico quietly explained the nature of their investigation. Being so numerous, changes in rodent and sengi populations over time can serve as important indicators of the impact of climate change, and how resilient this ecosystem is. It can also tell us something about how successful Tswalu’s Kalahari restoration project is, and how the presence or absence of specific animals affects the rest of the food web.

Here and everywhere, the lesson we are taught again and again is the same: even the most majestic lion cannot survive without rodents, ants, fungi, grass or bacteria. Effective conservation, in other words, needs to preserve entire ecosystems, protecting and valuing the very small as well as the very big. As for me, though I will never cease to be thrilled by leopards and hippos, neither will I look at mice in quite the same way again. This is just as well because being enthralled by the world of rodents, insects, flowers and mushrooms means never being bored no matter where in the world we might find ourselves. And it does put things in perspective. To understand the big picture, the small things really do matter.

Marcus Westberg is an internationally acclaimed conservation and travel photographer and writer. You can read our interview with him here and follow him on Instagram

All images by Marcus Westberg, except for the last image taken by Barry Peiser.