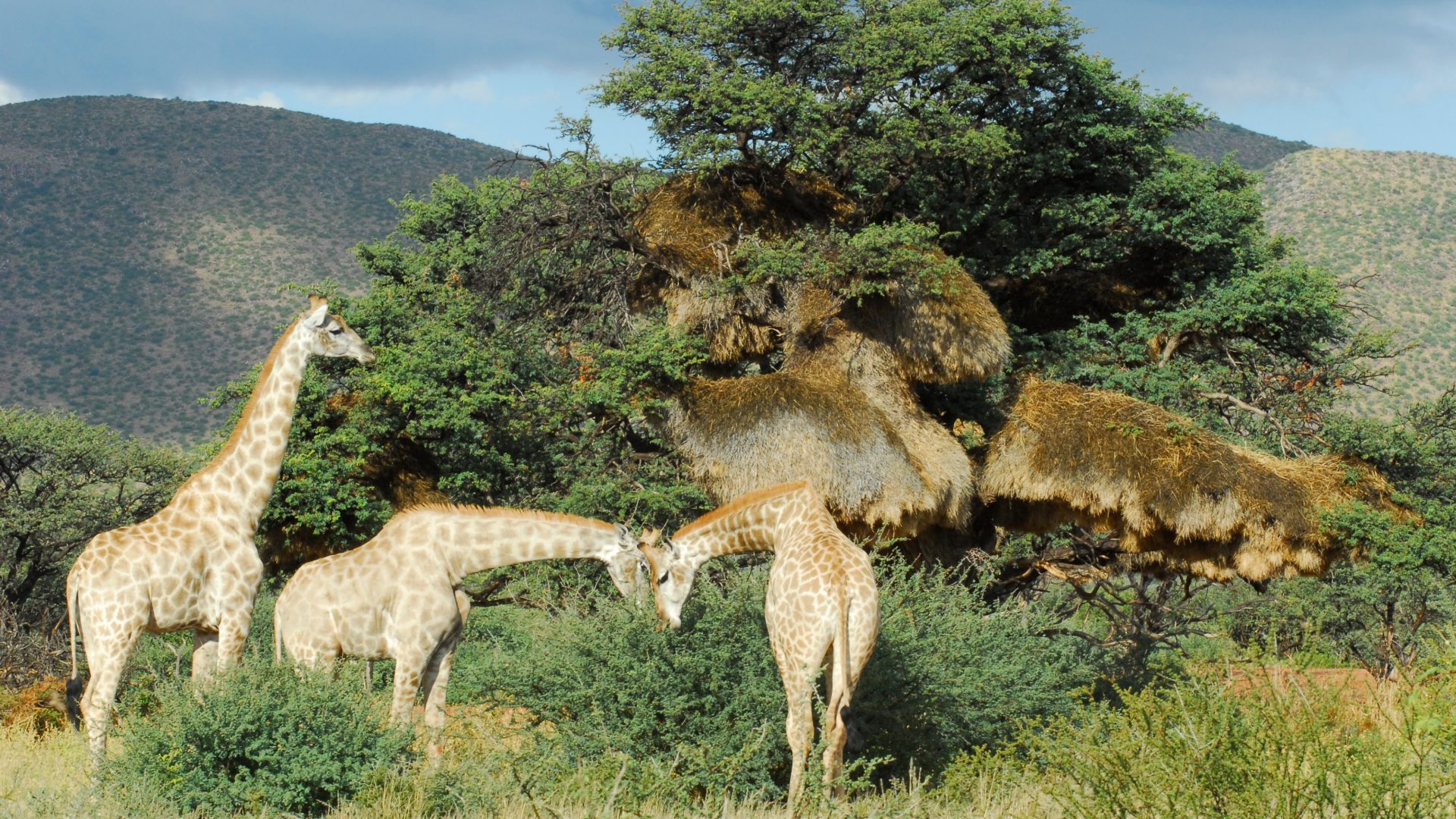 The Kalahari invokes many vivid images, but none more so than a silhouetted camelthorn tree complete with sociable weaver nest in a red sunset. These massive structures are a prominent feature of this landscape and Tswalu hosts thousands of these nests. Time spent at one of these colonies provides a fascinating glimpse into the complex interactions that are associated with these unique structures.

Sociable weaver nests may house hundreds of individual weavers, often living in small family groups, but collectively building and maintaining the colonies. The constant chatter of the birds, and the abundant energy and liveliness at a colony, is something truly mesmerising. It gives context to why they are called ‘sociable’ weavers. These nest colonies don’t just house the weavers: they are important to an array of Kalahari mammals, birds and reptiles. Anthony Lowney conducted his PhD thesis on this topic and found that these colonies are local hotspots not only of activity, but also of biodiversity.

Most conspicuously, large mammals such as wildebeest and springbok frequently exploit the additional shade provided by nest trees during hot Kalahari days. This can be a risky strategy as the big cats also appear to have an affinity for the large nests. Cheetah and leopard use the nests both as lookout points and territorial marking sites. They also use the structures for resting, as do African wild cats. Camera trap footage on Tswalu has captured a family of four cheetahs lazing on one colony. After dark, genets and arboreal rodents frequently forage in the nest trees, while aardvark and porcupine forage below.

The large, thatched ‘lodges’ constructed by the weavers have other benefits, too. The Kalahari is characterised by hot summer days and cold winter nights, a harsh environment for small birds. Individual nest chambers within the colonies provide a remarkably buffered environment, largely free of temperature extremes. This feature is exploited by other bird species, particularly acacia pied barbets, ashy tits and scaly-feathered finches, which roost in the chambers at night and even during the heat of the day. Redheaded finches also use weaver colonies for breeding. The smaller bird species typically reside in unoccupied chambers, taking what is available, but the weavers are less lucky with the feisty barbets.

Before sunset, barbets attempt to access the preferred centre nest chambers for roosting. Fights ensue. Groups of weavers meet the barbets head-on and with chaotic mid-air battles, push them away from the chambers and often onto the ground. Despite the weavers’ resistance, many barbets succeed in claiming chambers for the night, either by arriving early while the weavers are away or by sneaking into chambers while they are defending other chambers. Most colonies will host multiple barbets every evening, the chambers lost to the weavers.

The weavers’ conflicts with the barbets are negligible compared to those with pygmy falcons. These charismatic diurnal raptors, Africa’s smallest, are fully dependent on weaver colonies for breeding and roosting. The falcons permanently evict weavers from some chambers, then mark them conspicuously with white faecal matter at the entrances. The faecal marking may be a signal of occupation to other pygmy falcons, may serve to cool or warm chambers, or may provide some protection against ectoparasites. Regardless of the function of faecal-lined entrances, the weavers will not venture to these chambers again. Despite building the incredible nest structures, the weavers need to share these with unwelcome guests. Their hospitality is abused and the coexistence is often uneasy.

Agitation is clear at sociable weaver colonies that host pygmy falcons. Alarm calls, the equivalent of ‘Look out, falcon!’, are constantly uttered by the weaver individuals present. With good reason, too. Although the falcon’s diet mainly consists of small reptiles and invertebrates, they surprisingly often prey on weaver nestlings and recently fledged chicks. Even adult weavers need to be wary. Early naturalists suggested that these species probably live in harmony, but this could not be further from the truth. The reality is that the falcons prey on the species on which they depend to build their homes. But falcons may provide some services to weavers. They are aggressive, and their presence may deter snakes such as Cape cobras, for whom weaver eggs and nestlings are a favoured food source, from accessing the colonies.

Sociable weavers ‘work’ on their colonies daily. Without maintenance the colony structure steadily becomes shabby and eventually crumbles. Ironically, too much maintenance and building can lead to a collapse. As the nests grow, the strain on the tree branches can reach breaking point. Big Kalahari thunderstorms, typical in the summer months, often leave a trail of partially collapsed weaver colonies in their aftermath. Almost immediately the busy weavers will recycle the nest material and begin building anew.

Even a casual observer will realise that these structures play a vital role in the Kalahari ecosystem. The colonies are an important resource for the Kalahari animal community, modifying the environment by creating shelter, protection and habitat. The builders, the lively sociable weavers, are indeed excellent ecosystem engineers.