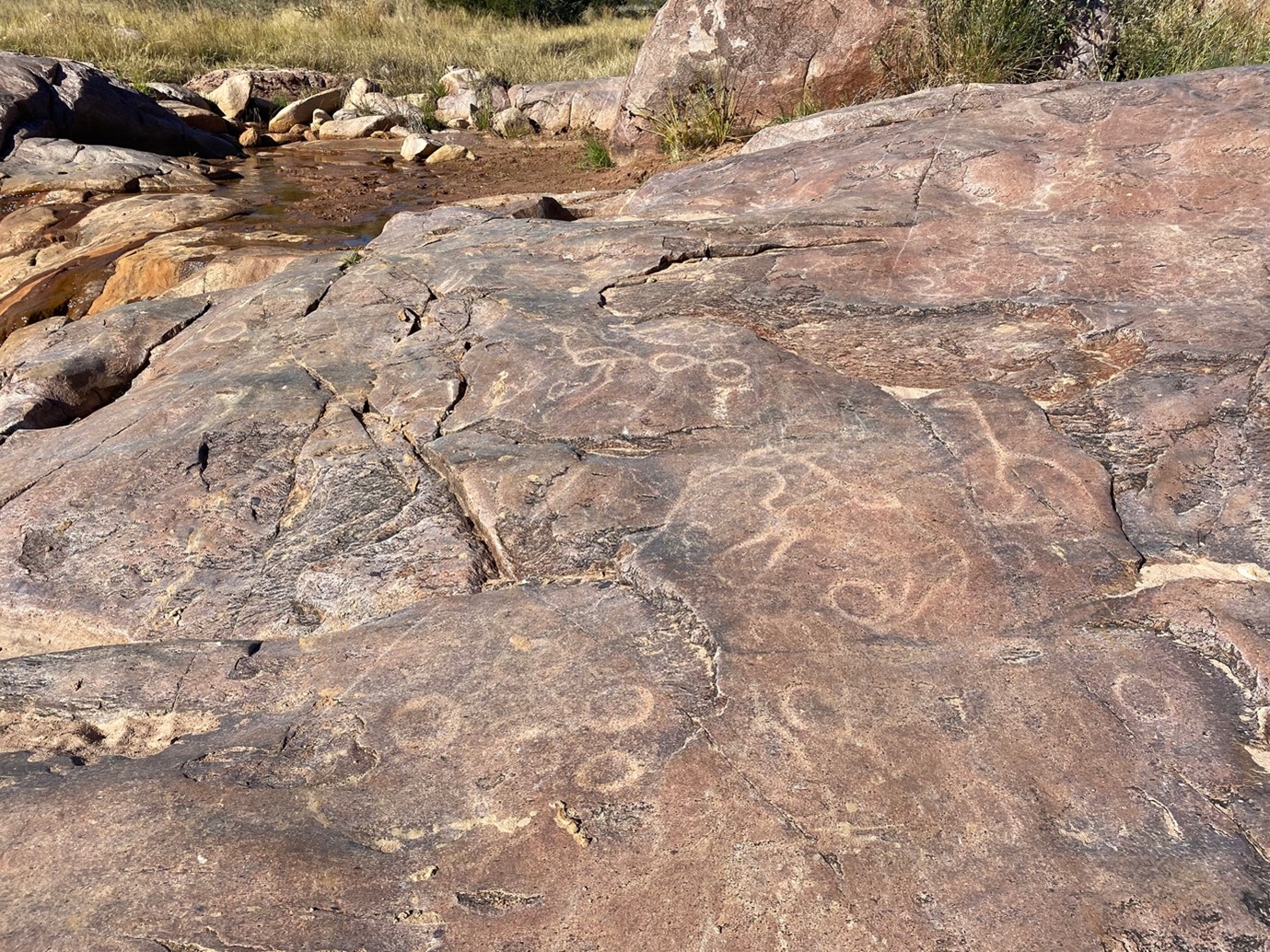 There are several well-documented rock engraving sites at Tswalu, including Steenkamp, Klipbak and Picnic Valley. As Pippa Skotnes explains, understanding rock engravings is more about feeling them than just seeing them.

Where to find rock engravings

Rock engravings are found in many parts of southern Africa and are often associated with mountains and hilltops, as well as springs or places where water collects in depressions in the rock. Most engravings are difficult to date directly and may be tens of thousands, or just a couple of hundred years old. At Tswalu, and surrounding areas, there are several wonderful sites where rock engravings may be seen, and all of these are strongly associated with water.

Waterholes are numinous places in many southern African societies and this is most evident in environments where water is scarce and rainfall unreliable. Similarly, hilltops are places of power and potency. !giten (translated from the |xam in the 19th century as ‘sorcerers’) would haunt the mountains, at times living in the waterholes as fallen stars, or near the places where pigments such as haematite were mined. Haematite may have been rubbed into the engravings or used to paint men’s backs so they would not be struck by lightning.

The Rain Bull (!khwa ka xoro) was often captured and slaughtered by the rain !giten on a hill where water collected, because the Rain’s blood could flow down the slopes and drench the dry ground. This Rain Bull, as well as other creatures such as water snakes, were attracted to young women, some of whom were taken by them into the pools to become the water’s wives. In the 19th century, the huts of young women secluded at puberty were said to be located on hills. Even today, many stories about waterholes persist, and work by Ansie Hoff suggests that young girls known as water spirits are said to protect the little animals, such as frogs and tortoises, who live in or around the waterholes.

Klipbak
Engravings on Klipbak include human figures and engraved cupules. The cupules around the waterholes are particularly striking as depressions one could imagine in ones’ own flesh. The Damara word for engravings (!ā|ūisa), for instance, is a direct translation of the action of making them. Klipbak is a high point in the area and a very rich site for multiple activities from tool making, to rain making, to imagining a composition of engravings across the landscape.

The meaning of rock engravings

Engravings differ from place to place, though there are several themes that appear to be present at most of them. Images are less often narrative, though one will see many animals engraved, and less frequently people. More often the marks chipped or scratched into the rock surfaces are symbolic, geometric, or mimetic. They appear to mimic the rings left as water receded in a cavity or imitate the hoof marks left by animals in sand.  Some suggest trance experiences (and the associated geometric visual hallucinations), others suggest the representation of numinous animals. One is tempted to try to interpret the images, but it’s worth remembering that the engravings would have been seen as an integral part of the place where they were instantiated and might have been imagined as less something to understand and more something to feel.

Nchwaneng
This extraordinary site, neighbouring Tswalu, has dozens of engraved figures and abstract shapes. It is situated on a low hill slope, with a view across the landscape and the setting sun. Water fills many depressions and hollows in the rock, and the engravings would have been felt underfoot as the pools were visited. Some are suggestive of wounds or cavities.

!gwē and |kamm: engravings as scars

An interesting concept in |xam is !gwē, which is described as a kind of presentiment: a tapping feeling in the body that warns of danger and might be felt in the scars on one’s body. This feeling is also able to communicate at a distance the presence of animals whose bodily characteristics can be experienced in the bodies of those experiencing the !gwē. A 19th century |xam elder named ||kabbo, for instance, described these !gwē as ‘letters’, or as a ‘book’ (a proxy for something that can carry thoughts across space). When those thoughts were received they registered in the body as a feeling described as |kamm. When a relative of ||kabbo was asked to comment on a copy of a rock painting he described the painting as !gwē (translated by the interpreter as a ‘picture’) which he responded to with a complex discussion of the rain, its things (and related prohibitions), and its power to kill. This translation then ties the ideas of long-distance communication to both the work of !giten, and the feeling of |kamm in the body of the images and marks or even scars made or found on the rock. Given that the engravings are often associated with water in dry environments; that waterholes are often the place of family history (for they were inherited); and that danger in the form of predators, strangers or the Rain Bull was present at waterholes, the |kamm were powerful sensations that could save or imperil life. Images, engraved on the rocks (by tapping or cutting) became part of, and at times embodied by the rocks, and could thus, potentially, be felt from afar. People living in a landscape such as Tswalu might have felt the presence of these scattered engravings just as we might think of a composition, yet they are not single images united by a frame, but rather multiple sites, circumscribing a space connected to those who lived within it.

Steenkamp and Picnic Valley
These sites in separate parts of the reserve are situated where water flows in streams down the low slopes of the Korannaberg. The water itself has smoothed the rock surface, and when the sun is low and shadows are created in the engraved hollows they can been seen from a distance. These permanent ‘scars’ on the surface of the rock are complemented by the transient hoof and paw prints left by visiting animals.

Sensing, rather than seeing, rock engravings

There is also a further translation of the word !gwē, which is ‘drunk’ or ‘intoxicated’. In this sense it names the effect of certain poisons used for hunting, and implies a feeling of altered consciousness. If we take all these translations of !gwē and |kamm together, it is clear that to begin to approach the engravings of Tswalu (and elsewhere) we have to know how to feel them, experiencing them not as something just to be seen, but as sensations and marks in our own bodies. A ‘picture’, in this context, is not an object that represents something in the world, but as a way of sensing things that are not present.

A putative rubbing rock (right) smoothed perhaps by elephants or other large animals over many years, was identified by Dylan Smith at Picnic Valley, and invites contemplation of non-human marking of the landscape – not an engraving, but a burnishing and an indication of the importance of water sources in a dry landscape.

Waste management bins, made from old, discarded farm infrastructure, are making recycling in Tswalu’s staff villages easier for all, while teaching young and old the importance of becoming more conscious consumers.