Did you know? Gus Van Dyk unpacks the facts about 3 hyena species 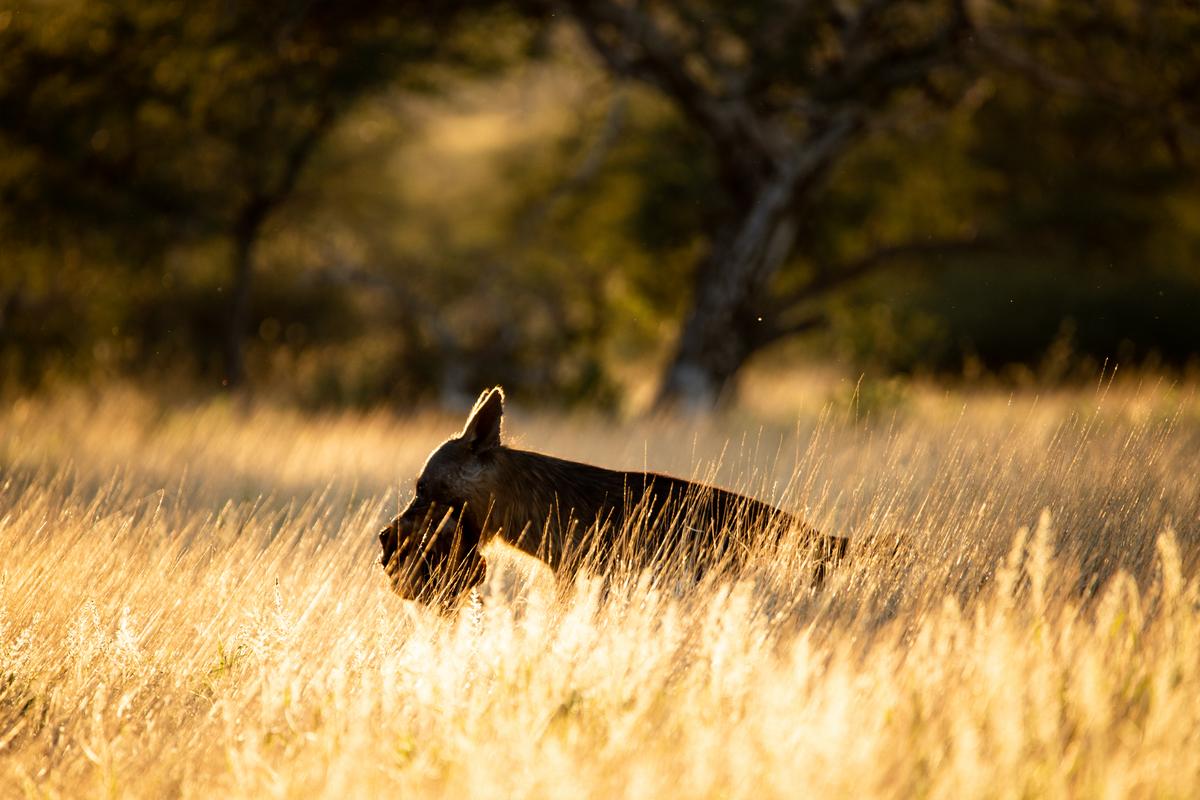 Home / Our stories / Conservation / THE HYENAS THAT CALL TSWALU HOME

The Kalahari is blessed with many carnivores. To provide some perspective, it is home to six of the seven cat species found across the entire Southern African subregion and four of the five ‘dog’ species found across the subregion. Neither dog nor cat, there are also three species of the hyena family found in Southern Africa, namely the aardwolf, brown hyena and spotted hyena. All three occur in the Kalahari and have made Tswalu their home.

A fourth hyena species, the striped hyena, is found in Eastern and Northern Africa, into the Middle East and across central Asia into the Indian sub-continent.

Hyenas are more closely related to cats than dogs, but as a family they really do stand alone in the complexity of their behaviour, their adaptations and their ability to occupy a niche in a competitive environment. All species of family Hyaenidae have followed quite different evolutionary paths.

Unfortunately, hyenas are heavily persecuted and under threat from man’s lack of appreciation for the key role they play in ecosystem functioning and health. Despite their low diversity, hyenas are unique and vital components of the Kalahari ecosystem. Yet, this marginal group of carnivores has become maligned for fulfilling such an important role.

Even if we do not yet fully understand hyenas, we should consider the words of well-known ecologist, naturalist and author, Aldo Leopold:

“The last word in ignorance is the man who says of an animal or plant ‘what good is it?’ If the land mechanism as a whole is good, then every part is good whether we understand it or not.”

Perhaps the most significant role that hyenas are playing is in educating us. By watching hyenas, man can learn to challenge perceptions and beliefs about how ecosystems ‘should’ function or even ‘must’ function. We surely have much still to learn about hyenas and ourselves.

The smallest of the hyenas found on the reserve is also the most specialised species in the family. Despite its relatively small size, an aardwolf can appear a lot larger and more ferocious by raising a mane of long hair and growling when under threat.

About the size of a jackal, the aardwolf has evolved to survive entirely on termites, licking them off the ground by the thousands every night with its broad, flat tongue. One animal can consume over 250,000 termites a night!

The aardwolf is persecuted on farmland because it is incorrectly believed to prey on livestock. An examination of its teeth will reveal that this innocuous little hyaenid has no way of eating meat because its teeth are reduced to tiny, rounded pegs.

Its behaviour is largely dictated by its diet. In winter, when the nocturnal termites it prefers disappear deep underground, the aardwolf becomes diurnal and can often be seen foraging in open grassland in the late afternoon sunlight.

Socially, the aardwolf differs from the other, larger hyenas in that it is monogamous. An aardwolf pair will defend their territory and males will play an active role in protecting the cubs in their underground den during the first few weeks of their life in early spring. The female leaves the cubs in the care of the male while she is foraging during the night, which means that during the first few weeks of the cubs’ life, the male will have little to no opportunities to eat.

The next species, by size, is the brown hyena. Like the aardwolf, the brown hyena is occasionally referred to colloquially as a ‘wolf’ or a ‘strandwolf (Afrikaans for beach wolf), because it is wolf sized and has a shaggy coat of long brown hair. These hyenas are known to patrol the remote stretches of the West Coast, looking for dead seals and any other protein that washes up onto the beach – hence the colloquial name.

The brown hyena only occurs in Southern Africa and is probably the one most often associated with the arid parts of the subregion because they are highly mobile, can survive in areas where there is limited prey and is able to utilise a wide range of food from vegetation to old carrion.

Brown hyenas are solitary foragers and are not built for stealth or speed. They seldom hunt successfully, making only occasional and opportunistic kills. On Tswalu, they are mostly secretive and elusive. When encountered, they are usually seen in the early evening and early morning, their tracks picked up in the early mornings along many of the roads, indicating just how far and wide these animals travel in a single evening in their search for a meal. Clans of up to 12 members usually have their dens in the Korannaberg mountains in the centre of the reserve, but the animals can be seen anywhere. Of interest is that all clan members will carry food back to the den to feed the cubs (usually only one female has cubs) and it is typical to see pieces of carcass scattered around a brown hyena den.

The largest of the hyenas (and the least numerous on Tswalu) is the spotted hyena. Of all earth’s creatures, the spotted hyena has probably suffered the worst reputational damage over the years – just watch Disney’s Lion King!

Often referred to as spotties by field guides and conservators, they are regarded as wasteful scavengers, but they are incredibly complex animals that hunt for most of their food while also effectively disposing of carcasses from dead animals. These would otherwise slowly rot and become disease hot-spots and breeding areas for flies and other disease vectors.

Spotted hyenas are famously matriarchal with all females in a clan outranking all males and with mature females being significantly larger than males. They are apex predators – right at the top of the food chain – and compete with lions for the role as ‘top dog’ in any ecosystem. In wetter parts of the subregion, with high game density, clans can be huge, but in the Kalahari their numbers are lower and clans are much smaller.

Of particular interest with spotted hyena is that the cubs drink their mothers’ milk and stay at the den for the first 18 months of life (compared to lion cubs that start eating meat at around three months of age). This high degree of parental care indicates an intelligent and social animal with a complex society.

Historically, Tswalu’s spotted hyena population consisted of only a few vagrants moving through the area. In recent years, reintroduction of a small clan has completed the full guild of predators that drive vital ecosystem processes on the reserve.