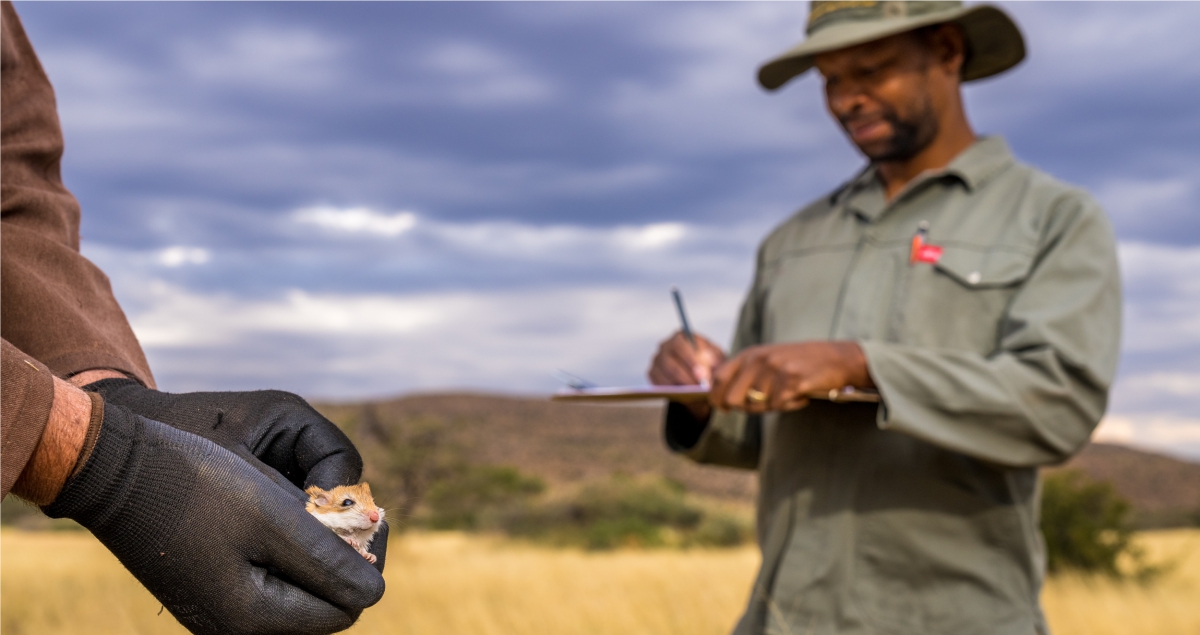 Small mammals are an intriguing group of animals whose vital role in the ecology of continental ecosystems, like the Kalahari, is not common knowledge, despite making up 66 percent of all mammal species in Africa.

Small mammals play a crucial ecological role, mainly due to their diversity and large numbers – mice alone can reach densities of more than 300 individuals per hectare – and the wide variety of habitats they are found in. They have a large impact on plants, invertebrates and other vertebrates. They are, for example, an important food source for snakes, monitor lizards, birds of prey and all carnivores up to the size of leopards, but at the same time, they eat both invertebrates and plants. They are also important distributors of seed, important soil fertilizers and plant growth stimulators, and some species are even known to act as key pollinators of specific plant species. By building burrow systems and tunnelling through vegetation they act as ecosystem engineers, creating suitable environments for invertebrate, plant and fungi species that might otherwise find it impossible to survive in the hostile Kalahari environment.

Considering their large impact on ecosystems, small mammals – especially mice, sengis and shrews – are particularly useful indicators of habitat health. The presence or absence of these species can convey important information about habitat degradation or disturbance, and so are often included in environmental impact assessments. Despite that, the potential role of these animals in ecosystem management is largely underestimated.

The link between habitat change and small mammal diversity is well understood both globally and in southern Africa’s Grassland Biome, though less so in the Kalahari. Degraded and damaged environments tend to be dominated by generalist species such as multimammate and four-striped mice, while specialist species such as climbing and pygmy mice thrive in more pristine areas.

Differences in the richness and diversity of small mammal species can, therefore, help us determine the health of a specific habitat. It is also possible to get some idea of ecosystem health by studying grasses, but these will not always give the same results. Vegetation indicators, though very important, do not reflect the impacts of disturbances such as noise pollution, soil compaction, illegal hunting and overhunting. They also don’t alert us to other disturbances to the ecosystem, such as decreased small carnivore numbers and species as a result of blanket predator control or from dogs preying on small carnivores. The most accurate assessments, therefore, are obtained through a combination of small mammal and vegetation monitoring, as is being done through our study at Tswalu.

The small mammal research through the Tswalu Foundation investigates the relationship between small mammal communities and habitat health in the Kalahari Biome. This is a unique opportunity to see if the above model is true in a vast, relatively undisturbed Kalahari environment. Our work should contribute to conservation in the larger Kalahari, not just at Tswalu – especially in the face of the severe climate changes projected for the area. Our study will also start to build a long-term database on the associations between small mammal community structure and other ecological indicators such as vegetation over time. Long-term data is more or less non-existent for most arid areas, so this will be of great value for future conservation and management efforts both at Tswalu and elsewhere.

In his role as head of research and conservation for Oppenheimer Generations, Dr Duncan MacFadyen manages support and funding and facilitates national and international researchers to conduct cutting-edge research focused on the natural sciences. He has authored and co-authored several books and has many scientific articles to his credit. Duncan is regularly aired on radio and has presented numerous papers on the ecology of South African wildlife. Read Duncan’s full biography here.

Nico Avenant is a small mammal ecologist with a special interest in community ecology and the contribution of species and their composition to the conservation of ecosystems. Nico has clocked up extensive field experience through his research as well as that of his postgraduate students. He has also completed numerous environmental impact assessments over the years. The Namib Desert and Skeleton Coast in Namibia, Elephant Marsh in Malawi, eastern Cambodia forests and the Marion and Prince Edward islands are a few of the fascinating places in which he has worked, often as part of national and international multi-disciplinary teams. Nico is currently curator, senior specialist scientist and HOD of the Mammalogy Department at the National Museum in Bloemfontein, and a Research Fellow at the Centre for Environmental Management at the University of the Free State.

All images by Marcus Westberg